Official opening of the Resources Building - University of the Sunshine Coast, Queensland, Australia

Official opening of the Resources Building

Our latest building features around 1,400 square metres of floor space and cost $4.7million. The project was fully funded by USC.

The Resources Building will be a new interface with the Sippy Downs town centre that is starting to take shape on the other side of Sippy Downs Drive. In designing the building we were conscious that, despite budget constraints, it needed to ‘look’ right and provide a welcome to people entering the campus or just driving past.

Deciding on the Resources Building was a strategic decision for the University. As a greenfield site, deliveries had always been made to the very centre of campus. Over time as the scale of deliveries has increased and the numbers of people have continued to grow, the old model didn’t suit any more because of occupational health and safety issues and the fact that the delivery precinct was prime real estate on the campus central space. Hence the decision was made to re-locate into a purpose-built facility on the campus perimeter where we could organise direct access without disruption to standard daily operations.

The hub of the Resources Building is the loading dock and associated storage and facilities at ground level. The ground floor houses: mail room; printery; Mail and Print Services (MaPS); and Information and Technology Services (ITS) computer workshops and offices.

Level 1 accommodates Marketing and Communications (M&C) who were previously spread across a range of (unconnected) offices in the Administration Building (Building B). Level 2 is occupied by Human Resources (HR), also previous occupants of the ground floor of the Administration Building. Given the new house for M&C and HR, significant space is freed up in the centre of campus for teaching and related uses.

Quite a lot has been achieved through this building for a modest investment and I’d like to spend a little time explaining how the decision to allocate these budget funds fits into our business model. At USC we spend a lot of time thinking about and planning for new infrastructure. If we don’t continue to grow the campus we can’t grow the student and staff cohorts. If we stop growing it will have negative impacts on the university and the Sunshine Coast region.

Despite the construction of major new buildings on an annual basis, we are always desperately short of space. In the past, for a ‘smallish’ building like this one we would have tried to access funding through something like the Commonwealth’s Capital Development Pool. However, this and similar schemes were discontinued around five years ago.

They were replaced by big, iconic teaching or research specific schemes such as the Structural Adjustment Fund (SAF) and the Educational Investment Fund (EIF). We have done very well from these but they too have now been discontinued.

Over the last few years, between winning big, competitive building grants we’ve needed to maintain momentum by self-funding smaller initiatives. In roughly $5million packages we’ve built Building H1 a science extension (2011/2012) to house nursing, engineering and administration staff; there’s this building (2013/2014) and work is well underway on a multi-level car park (2014/2015) made possible through a major donation by Roy and Nola Thompson. In 2016/2017 we will need to make a $7million allocation for our space within the new, Sunshine Coast University Hospital.

So what started off as special, one-off funding initiatives is now viewed in our budgeting process as an on-going necessity and we have to be able to fund new infrastructure every year. To do this we need funding certainty, which leads me on to the current stalemate in the Senate over the Government’s proposed higher education legislation.

Like 38 of the sector’s 39 VCs I support deregulation of student fees and like my VC colleagues I have reservations about other aspects of the legislation.

To put things in perspective, since this university opened in 1996, funding per student, in real terms, has declined by about 14%. This isn’t sustainable longer term and Universities Australia, the peak body representing this sector, believes crunch time has arrived.

Neither side of politics has been willing or able to invest additional funding in universities despite a number of major reviews, headed by the Bradley Review that was the source of deregulation, indicating that universities are underfunded by at least 10%.

USC was removed from the Regional Loading Scheme in 2012. This would have been worth $4million in the current year. Commonwealth data indicates that 32% of our students are classified as ‘regional’. Another Queensland university with only 24% of its students classified as regional received $14million in regional loading this year. Our local member may be able to promote our case on this one.

The former Government’s efficiency dividend, which the current government has maintained, took $2.5million from this year’s budget and there will be another $1.5million in 2015. I liken all this to death by a thousand cuts. For certainty in forward planning universities need more certainty in funding. In the absence of other alternatives, fee deregulation can bring stability and confidence.

So, although this lovely, new building may not look like a political statement, it helps explain how USC is managing its future and its contributions to the region.

I’d now like to invite the Honourable Mal Brough MP, Member for Fisher to address us and officially open the Resources Building. 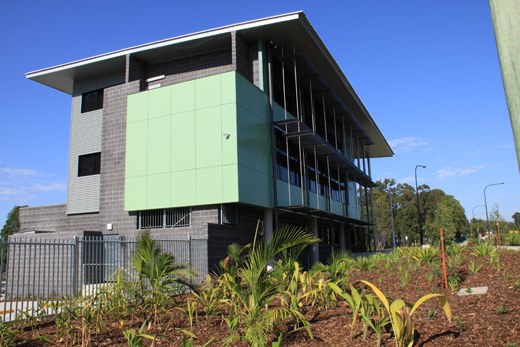