A very warm welcome to everyone, and a particular acknowledgement to The Hon Julie Bishop MP, Australian Minister for Foreign Affairs, and our good friend The Hon Wyatt Roy MP, Assistant Minister for Innovation, from the Sunshine Coast South seat of Longman. Wyatt assisted in getting the Minister here. And, of course, the Shadforth family who are responsible for bringing us all together this evening.

When our University celebrated its 10th birthday in 2006, Julie Bishop was Minister for Education, Science and Technology in the Howard government and I remember from that time she was a very passionate advocate for the Bologna protocol. She officially opened USC’s Sports Stadium in 2007. We had around 5,000 students back then.

Minister, it’s fitting to have you here during our 20th year, to get a feel, first hand, for the progress we’ve made and the partnership that’s been forged between this regional university and its community. We will have 14,000 students on campus this year and we have around 20,000 graduates out in the workforce. USC has contributed more than $9 billion to the regional economy since we were established. And you may be interested to hear that ‘your’ Sports Stadium will soon be hosting the Sunshine Coast’s own netball team in the new national netball competition to commence in 2017.

Something the audience here today may not appreciate is that USC works closely with the Minister for Foreign Affairs on a number of fronts. The new Colombo Plan is a very significant initiative championed by Julie Bishop. It has sponsored probably hundreds of our students by now to undertake overseas studies, and we’ve received a prestigious New Colombo Plan Scholarship each year since they were introduced in 2014.

The Minister is also responsible for ACIAR (Australian Centre for International Agricultural Research). USC is engaged in Asia/Pacific research projects worth $26.1 million. We are one of ACIAR’s major university research partners.

And finally, through DFAT (Department of Foreign Affairs and Trade) we have completed more than $7.7 million in aid projects in the health and education sectors, particularly in Indonesia. In Papua Province our training and mentorship of teachers has had a major impact on the quality of the school system.

So, to tonight’s presentation.

The University of the Sunshine Coast has enjoyed a great relationship with the Shadforth family over many years. Following Geoff’s tragic accident in 2013, we hoped that by working together with the family on this lecture that we could create something positive from a terrible event.

Now in its third year, the Geoff Shadforth Memorial Lecture has developed into something quite special and unique on the Sunshine Coast. To have had the first three lectures being delivered by Wal King from Leighton Holdings, Gerry Harvey from Harvey Norman and now the Minister for Foreign Affairs, the message to future presenters is that being invited to this event places you in esteemed company.

So, Minister, it is a delight to have you here, especially at such a frenetic time for those involved in the political cycle. We really appreciate your support for this special event. 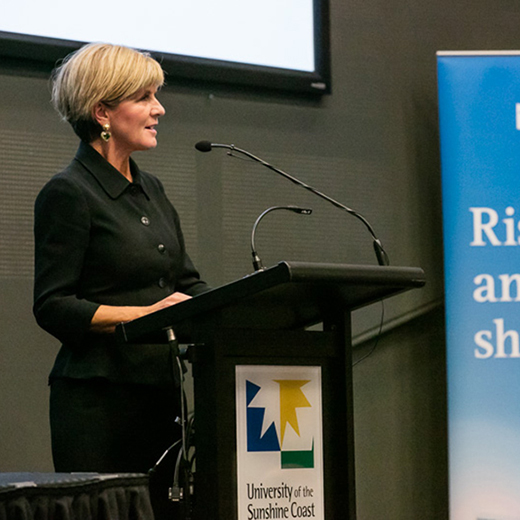