Good evening. I’d like to acknowledge our immediate partners Sunshine Coast Council and Melbourne Storm and talk a bit about USC’s involvement in this wonderful team. I’ve been given 3 minutes and I’ll apologise in advance for going over – I’m hopeless when I have a captive audience.

If we had really dissected the business case forensically, we probably wouldn’t have touched it with a barge pole. But one of the things that has made USC the success that it is, is a capacity to see an opportunity, take some risk, and back ourselves. And that’s something Sunshine Coast Council does too - so we were off.

Now sport, let alone a professional sporting team, is not core business for a university and universities are often reticent about engaging with the private sector – so hopping into bed with Melbourne Storm was a bit of a punt for us too. Given the urgency to get things done within ridiculous time frames, we had to trust each other a lot – and in Dave Donaghy, Danielle Smith and Bart Campbell I had a group I could trust, even if they did trash the University’s governance and approval protocols on a regular basis.

They gave me confidence they would make it work – and they continue to do so. Thanks guys.

And then there’s the Sunshine Coast Lightning - all of them – the coach, the players, the behind the scenes people. What ambassadors – what a champion team - they’re just amazing!

USC has a campus footprint that sits over a million people and when I engage with the school sector in Maryborough or Gympie or Caboolture or Petrie – they’re just as besotted with this netball team as the Sunshine Coast community. No metropolitan city-based netball team for these communities. Go Lightning!

And, of course, the university community are among your greatest fans – which is just as well for me because if the venture hadn’t been such an overwhelming success, I would probably have been tarred and feathered by now. (No points scoring but UQ are a sponsor of the Firebirds!)

I am really proud that our staff have got behind this unconventional adventure. Katie Kirby at the start, Nathan Gordon and the Stadium team, Mark Bradley with the Stadium upgrade – his life was on the line because I assured him that if the retractable seating wrecked the floor he was gone. There’s Iona and her team, Professor Brendan Burkett, Dr Mark Sayers and the sports science people, Swain Roberts and Simone Pearce on the legals, the many sporting greats we have on staff across all areas of the university who have joined the enterprise, Tania Stevenson with the liaison and high performance athlete projects, Biz Cannon and Scott Snyder on the money side, Paige Burton and the Executive Projects group – so many many people have contributed, including the volunteers on game day and the tragics who attended every game – thank you.

I must add that the home games have added a new dimension to my life. Once I’m out of a suit and decked out as a Lightning supporter most of my staff don’t recognise me. They look straight through me even if I say hello – I’m invisible – it’s wonderful.

I think the thing that strikes me most about the home games is the sense of community that’s created. Looking at what happens at other venues, none of them come close to USC Stadium on game night. No other venue I’ve seen has this family-carnival feel to it.

USC is an institution that’s embedded in the community – and being part of the Lightning story has certainly enhanced our credibility and impact. And not just at home, the TV coverage and the media have taken USC, as a Lightning appendage, across the country and internationally.

And wouldn’t it be nice to be able to fit another 1,000 or so spectators into that stadium. We need to work on that.

But this team is capable of causing troubles and I have personal experience of this. Early in the season, Stephie Wood presented me with a personalised playing shirt – there were photos of course, and I immediately sent one off to my 4 daughters, who have all played netball. The photo would have been fine but unfortunately I added a caption, it read, “Meet my new favourite daughter.” I can tell you that didn’t go down well. Thank you and have a great evening. 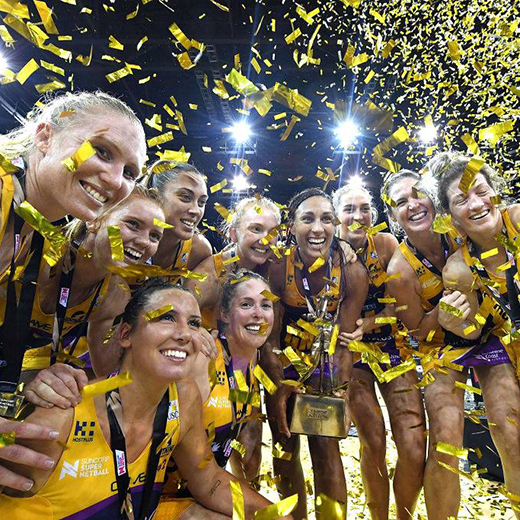