Thank you Brent (Miller) for your Welcome to Country. I acknowledge that this meeting is being held on the traditional lands of the Gubbi Gubbi/Kabi Kabi Aboriginal Nation. I pay respect to their Elders past, present and emerging. And I’d like to add that with 360 indigenous students enrolled with us this year, the future for emerging leaders looks very bright indeed.

A warm welcome to you all. Looking around our Sippy Downs campus today you would find it difficult to imagine this campus as a boggy cane field back in 1994 when builders Pat Evans and Trevor Harch, surveyed the low-lying, former sugar cane land at Sippy Downs and described it as a swamp!

They then commenced the task of building Australia’s first greenfield university campus in more than 20 years?

Great minds, great plans and great work; layered with architectural creativity, artistic innovation and environmental sustainability in a subtropical climate. That’s how our design and construction partners have won more than 30 awards for USC’s built environment.

The University has always strived to balance its built and natural environments to achieve sustainability – a feat that has become a hallmark of our architecture, art and campus development as a subtropical architectural exemplar.

Emeritus Professor Paul Thomas AM, USC’s founding Vice-Chancellor and President and Mark Bradley, Director, Capital & Commercial worked tirelessly with the Master Planners to ensure that Professor Thomas’ vision for the new University was realised. We had Paul on campus earlier this week. He visits every year or two to keep an eye on what we’re up to.

I remember back in about 2012, not long after I became Vice-Chancellor, we were very short of money and desperately needed more space, so I commissioned a very plain box of a building. I knew Paul wouldn’t be impressed but as Mark Bradley said to me, “Don’t worry about it. When we get the next grant for a big building we can wrap it around this one and Paul won’t notice it.” And that’s exactly what happened. You’ll visit Building H later this morning.

So where did the vision for the USC campus originate? It’s based on the University of Virginia. Following a visit to the Thomas Jefferson University in the United States, Professor Thomas drew inspiration from Jefferson’s visionary development of that campus for USC’s Master Plan that includes a primary spine, two rows of buildings facing the lawn in the middle, and open at both ends. Students, staff and community members are welcomed on to campus at the site’s north-west entrance and are encouraged to enjoy our facilities all the way down the green to the lake at the south-east end. Secondary building spines were planned laterally, thus developing colonnades down both sides of the campus. And the centrepiece on campus is our University Library, the metaphorical brain of the campus. This has a nice twist to it. Up until Jefferson’s university was founded in 1819, the Chapel was traditionally the core of a university, but Jefferson wouldn’t have that. A nice piece of heresy/history!

John Mainwaring, who is here today, co-designed the University’s Library building with Lawrence Nield of Lawrence Nield & Partners. The Library, opened in early 1997, won six awards that year including the prestigious Sir Zelman Cowen Award for Public Building from the Royal Australian Institute of Architects. In 2012, John donated his considerable personal art collection of paintings and prints to the University, many of which are hanging in the Library and the Learning and Teaching Hub – one of our most recent buildings. I encourage you to visit the Library today to view this wonderful collection. We have made a strategic decision that all new building will be “art friendly” so that students, staff and visitors have access to a culturally rich environment.

In 2013, the University was a joint winner of the Wildcard Award from the Urban Development Institute of Australia (Queensland). The award recognised USC’s significant contribution to the urban development industry and the community; its commitment to best-practice urban design and development, and its encouragement of creative and artistic flair in campus development. It found: “USC has a distinct ‘sense of place’, which has been achieved through sensitivity to the needs of the regional ecosystem, as well as meeting the needs of campus students, staff and the wider community.”

With the expansion of the University’s geographic footprint from Fraser Coast to Moreton Bay, student numbers are expected to continue to grow, and further architectural infrastructure will be required. It’s a wonderful opportunity to create inspirational environments for our teaching, research and community engagement.

In 2017, the original treed entrance to this campus remains (supplemented by profuse native plantings across the site), side by side with the Innovation Centre, the building grid is two-thirds finished, the lake has been duplicated and the Library has taken pride of place in the middle of the primary spine.

The secondary spines now reach out on one side of a five-storey Health and Sport Centre and on the opposite side to a semi-industrial building for practical studies in civil engineering and paramedic science (from concrete stress tests to mock car accidents). Alongside this building sits the latest jewel in USC’s architectural crown, the $37.2 million Engineering Learning Hub with 3D visualisation technology including the CAVE2○TM, the only facility of its type in the world to be used for teaching as well as research.

Just as you need a plan and a rationale for doing things, successful organisations need to be opportunistic. They need to take calculated risks and be prepared to back themselves when an opportunity presents.

After consultations with Moreton Bay Regional Council stretching over several years, things rapidly moved to a higher level when the Council announced it was purchasing the former Petrie Paper Mill site, and that a university campus would be the foundation tenant. After a detailed competitive process, USC was selected as the successful tenderer.

To put this in perspective, once the Moreton campus opens in 2020, USC will have a network of campuses, each about an hour apart, which will service one million people. This is the sort of scale required to evolve USC into a truly great university of international standing.

From the $12.5 million foundation stage of two buildings and two lecture theatres opened in 1996 accommodating our first intake of 524 students to today, we now have 23 significant buildings on this campus accommodating around 16,000 students. USC is well placed to continue to grow and provide higher education opportunities to our communities. 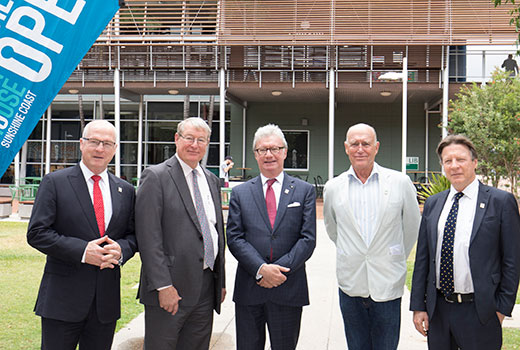