Several University of the Sunshine Coast quidditch players are eyeing off spots in the national squad after the USC team made its successful debut at the Australian championships.

The USC ‘Dementors’ recently travelled to Melbourne to compete against 18 other teams at the 2015 Oceania Quidditch Championships, also known as QUAFL, which were held at Monash University’s Clayton campus.

Quidditch is a ground-based version of the high-flying game made famous by JK Rowling’s Harry Potter book series.

While USC has the largest university-based quidditch league in Australia, prior to this year’s tournament none of its players had contested the national titles.

The team put in a solid performance, winning two out of five games before bowing out to the Wrackspurts Quidditch Club in a hotly contested semi final.

“Considering this was our first outing at nationals we were really happy with how well we played,” she said.

“The semi final was such a close game – it came down to the other team catching the Golden Snitch, which in this case was just luck.”

The Dementors played their first major tournament against just two other teams at Unibattle on the Gold Coast in May, and Mrs Thomas said the team was excited to play in front of a larger crowd in Melbourne.

“There were hundreds of people there watching the games, which made for a great atmosphere,” she said.

“The quidditch community is a good combination of people who love Harry Potter and people who just love sport.”

After strong performances at QUAFL, several USC players are now under consideration for selection to the Australian team, which will travel to Germany to compete in the Quidditch World Cup in July.

In the meantime, the USC league will continue to play casual games each Wednesday evening at the University’s rugby field.

Mrs Thomas, however, will need to sit out the next few training sessions after breaking her wrist during a tackle at the national championships. 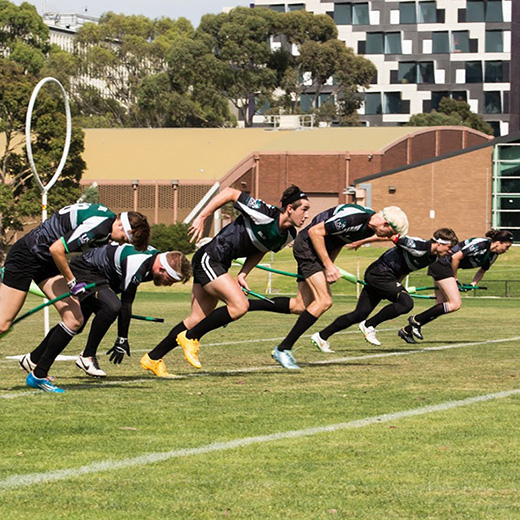