Queensland groper on the menu for USC scientist - University of the Sunshine Coast, Queensland, Australia

Queensland groper on the menu for USC scientist

A USC scientist is leading an international team in developing new ways to breed Queensland gropers in captivity in order to establish a lucrative aquaculture industry and protect vulnerable wild stocks in South-East Asia.

The Queensland groper, or giant grouper as it is known outside Australia, is one of the largest reef-dwelling fish in the world, living up to 50 years and growing to a massive 3m long and 400kg. It is the aquatic emblem of Queensland.

While it is protected in Australia, the species is threatened in parts of Asia where it is highly prized as a traditional banquet centrepiece that signifies abundance. In places like Hong Kong they can fetch up to $180 per kilogram at live fish markets.

USC’s Genecology Research Centre director Abigail Elizur, who is a Professor of Aquaculture Biotechnology, is leading the research effort that involves scientists from Vietnam, the Philippines and Cairns.

“In the wild, both male and female giant groupers take many years to reach sexual maturity so fishing is unsustainable because they are caught before they have a chance to breed,” Professor Elizur said.

“They are also protogynous – they develop first as females and later turn male – so all of the males are older and can be very large and difficult to handle.

“Here at USC we are looking at the different genes associated with this sex change and reproductive process. We would like to have fish change from female to male at a younger age when they are smaller because it would be much easier for captive breeding.

“We are also looking at broodstock management. One female can produce hundreds of thousands of eggs, but when these grow they will all be sisters with not enough genetic diversity, so genetic management is a really critical step when you are setting up aquaculture operations.

“Also, because these fish are so large, we are looking at surrogate technology to see whether we can take germ cells from giant groupers and incorporate them into smaller grouper species so the broodstock is a smaller species but spawns giant grouper.”

This five-year collaborative project is funded by the Australian Centre for International Agricultural Research and involves scientists from USC, FinFish Enterprise in Cairns, the Research Institute for Aquaculture number 1 in Vietnam and the Southeast Asian Fisheries Development Centre in the Philippines.

Professor Elizur said this project would use techniques developed at USC’s GeneCology Research Centre, including genetic marker identification as well as slow-release hormonal therapies and germ-cell transplantation that were developed by international collaborators in the United States and Japan respectively.

FinFish Enterprise will contribute expertise in giant grouper broodstock management, spawning and larval rearing, while partners in Vietnam and the Philippines will share their extensive knowledge of the aquaculture of other grouper species.

It is expected the research results will lead to the establishment of a reliable and highly lucrative giant grouper aquaculture industry in all three countries and relieve the pressure on remaining wild populations. 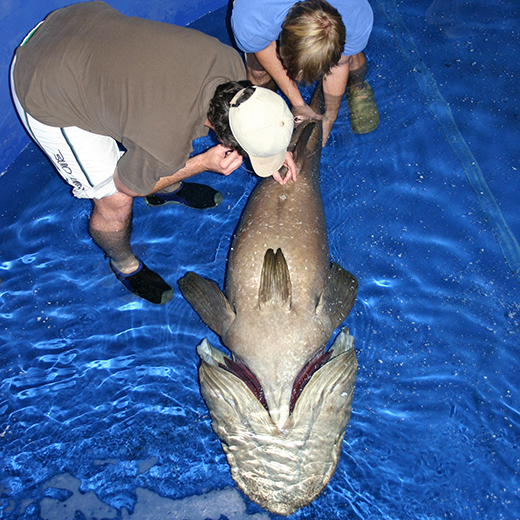