Even though she’s a national sporting hero in Thailand, Patarawadee Kittiya managed to ‘fly’ under the radar for most of her first year at the University of the Sunshine Coast in 2014.

Twenty-year-old Patarawadee – better known as Ploy – has been a member of the Thai national swimming team since she was 15, specialising in butterfly.

She set records in the 100m and 200m butterfly at the Thai National Games last year and was a member of 4x100m freestyle relay team that won gold at the 2013 Southeast Asian Games.

Ploy is studying a Bachelor of Sport and Exercise Science at USC and had enjoyed relative anonymity until she received a prestigious Half Blue award at the University’s annual Sports Awards Ceremony in late 2014.

The ambitious swimmer plans to defer her studies this year to concentrate on training for the 2015 World Championships and 2016 Rio Olympics.

“We hired an Australian coach in Thailand and I was the fastest in the pool, so he suggested I go to Australia to get practice swimming against faster swimmers and put me in contact with Peter,” she said. “My brother is also in the Thai team, so he came here to train too.”

“I had always asked my father to let me study abroad but he never allowed me because he really worried. But after he came to the Sunshine Coast and saw how beautiful and safe and spacious it was, he allowed me to come back to study here.

“I’ve never been away from home by myself before so it’s challenging but I love it. And it’s a good challenge because everything is in English – that’s not my first language so I have to work harder than normal but I really enjoy it.

“What I really love about this uni is that all the teachers are so friendly and really helpful even when I drop in for extra help all the time.

“My family owns a swimming club in Chiang Mai (Thailand) so my biggest goal after I finish my studies is to go back and be a coach. I want to learn as much as I can and try to help the Thai swimmers.” 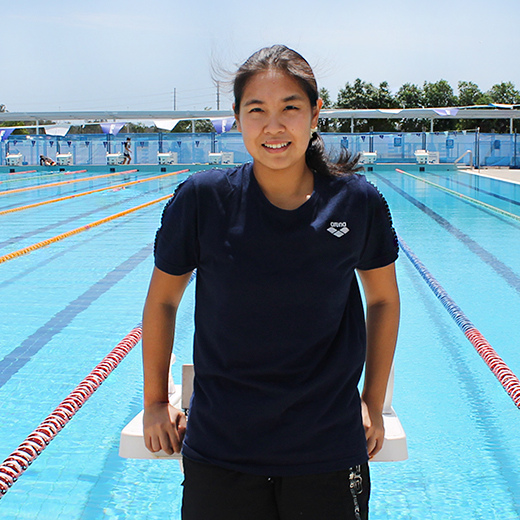