A USC researcher is calling for greater community involvement and vigilance by motorists at Sippy Downs to help preserve the local kangaroo population.

Master of Science student Beth Brunton, who is leading the South-East Queensland Eastern Grey Kangaroo Conservation Project at USC, said increased traffic and habitat loss in the area was taking its toll on the number of kangaroos on campus.

Last August, tracking collars were fitted to four of USC’s resident Eastern greys that enabled Ms Brunton to follow their movements for two months (see map of results below).

“What that showed us was that the kangaroos rely on both the campus and adjacent remnant bushland, parks and schools as habitat,” she said. “The kangaroos regularly cross the roads around the university at all times of the day.

“Unfortunately road deaths are still a big factor in declining numbers with five recorded deaths at, or in close proximity to, USC in the past six months alone. The future development of the Sippy Downs town centre across the road is likely to exacerbate that problem and contribute to habitat loss too.

“USC plans to do more to optimise habitat for the kangaroos on campus by strategic tree planting and experimental pasture management but we also need to reduce deaths from cars, so we are installing more speed control signs and reminding drivers to look out for kangaroos when driving on and around the campus.”

Ms Brunton said the research project was aimed at making well-informed recommendations for the sustainable management of threatened populations in urban areas.

“Of course we also want to save USC’s kangaroos, but increased urbanisation is impacting on numbers right across the entire region, not just at the University,” she said.

“We are asking South-East Queensland residents to be part of this research by taking part in our online survey. Every piece of information helps, whether people have had occasional sightings or long-term observations of one or more groups of Eastern grey kangaroos.

“Local residents can also take part in our regular head counts at USC, where we walk the campus for three days every six weeks carrying out a census. Quite a few of our new students recently signed up to volunteer for this project, which is great.”

To take part in the survey or for more information, including how to identify Eastern grey kangaroos, visit usc.edu.au/kangaroo-research.

Aerial photograph of the USC campus at Sippy Downs showing the movements of four different kangaroos over a two month period. Each different colour represents a different kangaroo. The red circles indicate the danger zones where kangaroos are crossing roads. The orange triangles show the extensive range of one of the larger males. 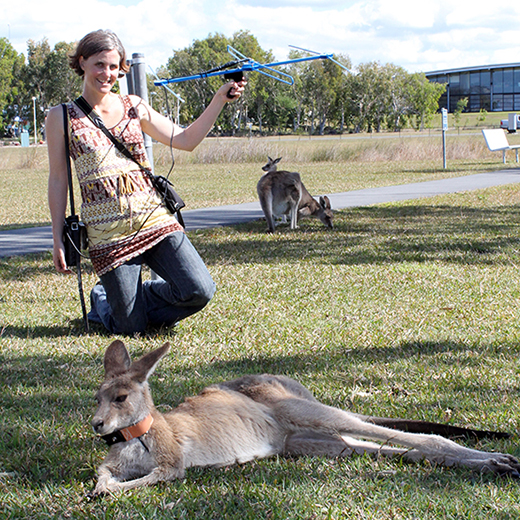