Jessica, who grew up in Kawana, is thriving as the senior writer and arts and fashion editor for pop culture magazine scenestr, based in its Brisbane office.

Initially working for the magazine as part of her Bachelor of Journalism internship, Jessica was offered the senior writer position in July 2014 after just three days’ work.

She said it had been a thrill to be thrown into the deep end in her first professional role as a journalist.

“I compile and edit the ‘Box Office’ section of scenestr, which covers all areas of art and fashion, for both the Queensland and South Australia editions,” Jessica said.

“On a daily basis, I’m out interviewing people, writing stories and organising our interns and contributors.

“I’ve found that I’m really drawn to writing reviews. I go to a lot of theatre and ballet opening nights and I love communicating what I’ve seen on stage and how the performance has made me feel.”

The Kawana Waters State College graduate said the work placements offered as part of the USC Journalism course were invaluable.

“I definitely learnt all the skills I needed at uni, but getting practical experience in a newsroom is so important,” she said.

“When I first started, it was hard to wrap my head around all the things I was thrown into — in my first week on the job I met the Premier.”

USC Lecturer in Journalism Jane Fynes-Clinton said Jessica’s enthusiasm for getting hands-on experience in journalism had paid off.

“Jessica was a real self-starter and was keen to chase a career in the street press side of journalism,” she said.

“Her success shows exactly why we work with our students to engage with industry as much as possible before they graduate.

“The journalism world is broad and our students have done placements in everything from magazines in Sydney and Melbourne to organisations like the Woodford Folk Festival.” 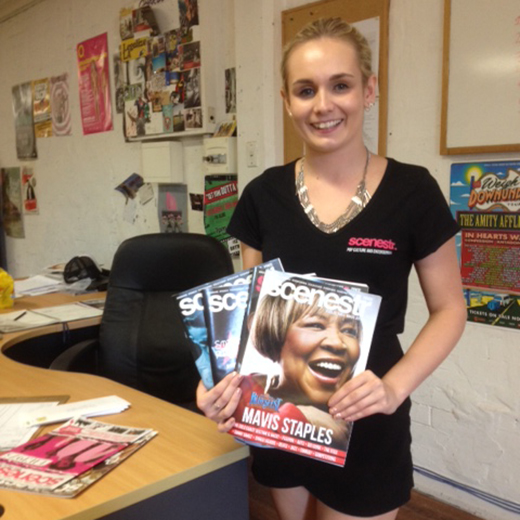