A new test being developed by a University of the Sunshine Coast researcher could dramatically reduce the time taken to diagnose some of the world’s deadliest diseases.

USC PhD researcher Ameh James is developing a rapid molecular diagnostic test for infectious diseases, including Ebola and West Nile Virus, which can be used in low-resource settings.

Ameh’s promising results to date resulted in him being awarded a competitive sponsorship to attend the esteemed UNESCO Merck Africa Research Summit (MARS) held in Geneva, Switzerland on 19 and 20 October.

Ameh will also deliver a presentation on his project at the conference, which will gather scientists and academics from around Africa to share innovative health research.

He said he was excited to be selected for the prestigious conference, at which he will have the chance to collaborate with like-minded researchers.

“Getting a sponsorship from an organisation like UNESCO is rare, and it shows that the test I’m developing is in line with infectious disease research internationally,” Ameh said.

“The ‘gold standard’ for Ebola testing cannot be used in most labs because of the expense and training needed.

“The accuracy is comparable to the gold standard technique, but it would greatly decrease the turnaround time of patient diagnosis and reduce their time spent in quarantine.”

Ameh will travel to Nigeria for three months later this year to test his techniques in clinical settings, and he has recently been validating the test in CSIRO laboratories in Geelong.

Senior Lecturer in Molecular Engineering Dr Joanne Macdonald, who is Ameh’s PhD supervisor, said she believed the test could have a major impact on disease monitoring in Africa.

“Currently, samples are being sent to central facilities in Africa, and results take two days to come back. In the Ebola outbreak, that made it very difficult to put infection control measures in place,” Dr Macdonald said.

“Ameh’s test could reduce the diagnosis time to 30 minutes.” 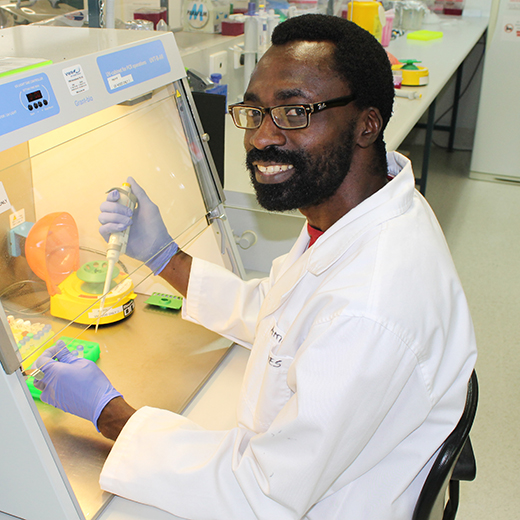