A former Caboolture school student who reached for the stars as a circus aerial artist in the United States in his 20s has soared into a nursing career on the Sunshine Coast in his 30s, with his award-winning university success leading to a hospital job.

St Columban’s College 2000 graduate Paul Kaczykowski will receive the University of the Sunshine Coast’s Chancellor’s Medal when he graduates with a Bachelor of Nursing Science at a ceremony on campus at Sippy Downs on Thursday 7 April.

The USC Chancellor’s Medal recognises a graduate’s outstanding contributions to the local or wider community, as well as high academic achievement.

Mr Kaczykowski, of Peregian Springs, earned a grade point average of 6.94 out of 7. He also received the Joy Croker Silver Medal from the Centaur Memorial Fund for Nurses last semester for gaining the highest GPA in the final year of his degree.

The 32-year-old was recognised nationally as one of five Emerging Nurse Leaders selected by the Australian College of Nursing in 2015 for a development program.

“I’m now working for Sunshine Coast Hospital and Health Service in a graduate nursing position at Nambour General Hospital – in the same surgical ward I requested after completing my internship there during my USC degree,” he said.

“The ward is busy and challenging, and I wanted to push myself in my first year.

“It’s an exciting time in health on the Sunshine Coast with the new Sunshine Coast University Hospital coming, and I’ve been more successful than I ever imagined. USC has helped me exceed all my hopes.”

Mr Kaczykowski, who was “amazed and honoured” to be nominated for the Chancellor’s Medal, volunteers with Sunshine Coast Street Angels and has ongoing USC links including the new USC Nursing and Midwifery Alumni Network which connects alumni.

During his degree, he was president of the USC Nursing and Midwifery Student Group, vice-president of the fledgling USC Active Minds chapter supporting mental health, and a student mentor, advocate and committee representative.

“I enjoyed helping people, whether one-on-one and face-to-face, or through Facebook posts. That personal contact gave me so much satisfaction,” he said.

“Nursing needs competent practitioners, and I wanted everyone to be successful with me. I also felt I had more time available because I moved back in with my parents and wasn’t in paid work.”

Mr Kaczykowski said he had definitely made the right decision to return to the Coast after a decade of travel that included working as a trapeze performer with a circus in the US and as a tour guide in Europe. 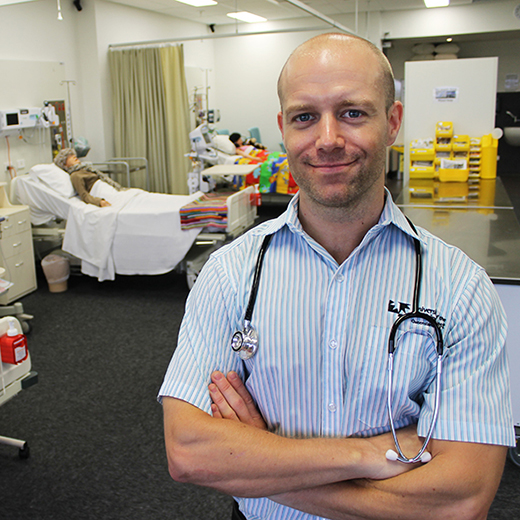