Researchers at the University of the Sunshine Coast are hoping to reduce the agricultural damage caused by snail infestations following a breakthrough discovery into the animals’ mating habits.

Recently published in the Journal of Biological Chemistry, the group’s research focussed on the sharp ‘love dart’ produced by snails’ bodies to aid reproduction.

During copulation, mating snails stab one another with their darts – behaviour which is thought to have inspired the myth of Cupid’s arrow.

While scientists have long been aware of the existence of the love dart, USC Lecturer in Molecular Biology Dr Scott Cummins said its function had always been a mystery.

“We knew there must be a biological reason for it – why would a snail be trying to hurt the snail it’s mating with?” Dr Cummins said. “But we had never known precisely what role it played in the reproductive process.

“This research has found the love dart is used to inject a pheromone into the other snail’s body. If injected correctly, this pheromone increases a snail’s ability to sire offspring.”

USC Research Fellow Dr Michael Stewart said the love dart, which is found in around one third of all land snail species, was the snail’s version of the competitive sexual behaviours seen throughout the animal world.

Snails with the love dart include invasive species that contaminate crops and damage farm machinery, causing widespread issues for the Australian agricultural industry.

Dr Cummins said the researchers have been studying the snails’ mating behaviour in the hope of uncovering a way to inhibit their reproduction. A previous project involved mapping the genes that control land snails, the first discovery of its type.

“If we understand the genes then we understand how an animal functions and reproduces,” he said. “If we can inhibit the performance of the love dart pheromone, maybe we can help to control pest species, or prevent other species from becoming pests.” 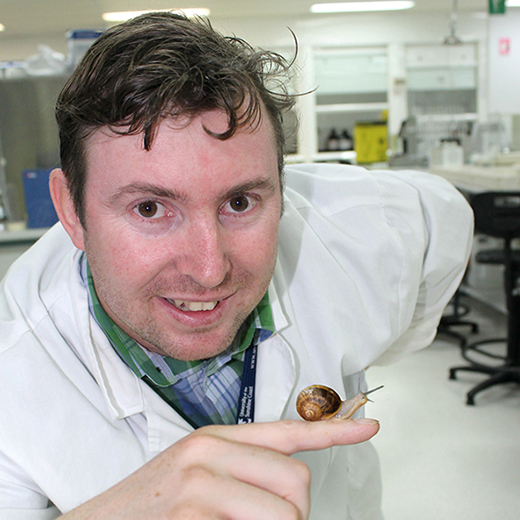