Four high-achieving, first-year students at the University of the Sunshine Coast have each received $32,000 Thompson Excellence scholarships.

Vanessa has started a degree in Biomedical Science, Joshua is enrolled in a Bachelor of Creative Industries, and Brooklyn is undertaking Mechanical Engineering (Honours).

The Thompson Excellence Scholarships were launched in 2015 following a $5 million gift to the University by Roy and Nola Thompson.

All four recipients recently met Mr and Mrs Thompson at the Sunshine Coast Mind and Neuroscience – Thompson Institute at Birtinya.

This facility is housed in a building that Mr and Mrs Thompson donated to USC last year with the express aim of assisting in the treatment of mental health issues, such as dementia and depression.

The students chatted with the Thompsons, thanked them for their support and outlined how the scholarships would enable them to focus on their study.

Vanessa said: “This scholarship has taken such a load off my shoulders as I don’t have to work long hours to pay for uni, but can instead focus on my studies and put all my effort into achieving great marks.”

Joshua said: “Receiving the scholarship will make a huge difference to my university experience. It will help with my transport costs and I won’t have to work as many hours at my part-time job, which will give me more time to focus on studying.”

Brooklyn said: “It will take a lot of financial pressure off me so I can focus more on my studies and take up as many opportunities as I can in my degree. I had the chance to meet Mr and Mrs Thompson and they were lovely and really interested in what we were all studying.” 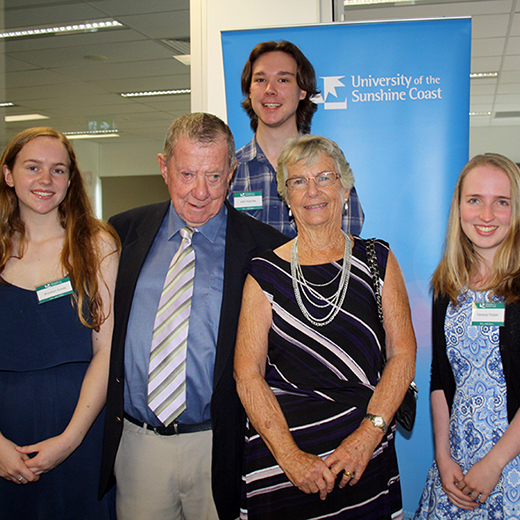