A renowned Torres Strait Island artist whose work is displayed at the University of the Sunshine Coast will receive an Honorary Doctorate at a graduation ceremony on Thursday April 7.

Kenneth Thaiday Senior, who is internationally recognised for his ability to combine traditional knowledge and contemporary artistic techniques, will receive the award in front of a large crowd at USC’s Education, Nursing and Midwifery graduation ceremony at 3pm.

Originally from Erub (Darnley Island) in the Torres Strait, Mr Thaiday is best known for his distinctive sculptural works, which include intricate ‘dance machines’ or headdresses with complex moving parts that can be incorporated into dance choreography.

One of his most significant sculptures, the Big Beizam hammerhead shark headdress, is on permanent display in the foyer of USC’s Buranga Student Support Centre after it was donated to the University by the Proost De Deyne family.

Mr Thaiday’s work has also been exhibited at the USC Gallery.

Now living in Cairns, Mr Thaiday said he was looking forward to visiting the Sippy Downs campus to receive his first honorary degree.

“This award is very special to me,” he said.

Professor Hill said: “His art, be it sculptures, song, dance or storytelling, is grounded in tradition, and he is an inspirational figure to his people in the reinvigoration of their cultural identity.

“The friendship gained through knowing this fine artist enriches the lives of USC’s staff, our students and the wider Sunshine Coast community.” 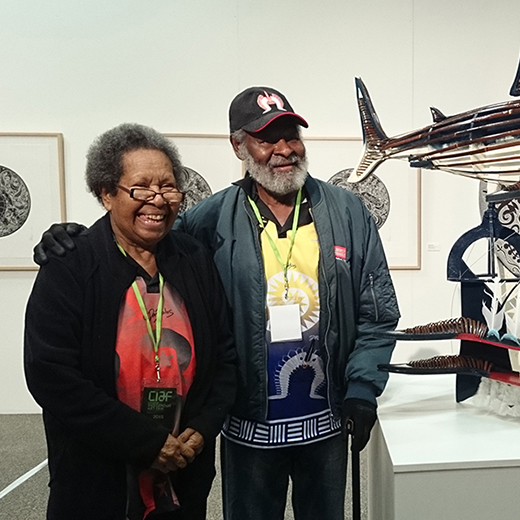