In an article published on renowned online magazine Slate, Professor Patrick Nunn shared his research suggesting that a rapid drop in sea levels might have been responsible for centuries of warfare between Fiji’s historic tribes.

The sea level fall of around 70cm between 1250 AD and 1350 AD could have resulted in a mass food shortage for Fiji’s coastal tribes.

This competition for scarce food sources would have resulted in tribes attacking one another and eventually retreating to hilltop towns to escape the conflict, Professor Nunn said.

He said the experience of Fiji’s historic tribes highlighted the vulnerability of island societies to changes in climate.

“One lesson is that people living on small islands in the middle of the ocean don’t have the adaptation options that we, on larger land masses, enjoy,” Professor Nunn said.

“The research underlines the fact that island populations are hugely affected by very small changes to their natural environment. If the sea level falls or rises and their food sources are threatened, there is little they can do.”

Professor Nunn said the little-known settlements in Fiji’s interior pointed to a relatively sudden movement of people from Fiji’s once abundant coast into the hills, where they remained until Europeans arrived in the 19th century.

“A cooling of the climate and sea level drop would have killed off the most productive part of the coral reef, as well as affecting crops nourished by the inland water table,” he said.

“It’s likely that they saw an 80 percent reduction in food availability over several generations, and tribes would have started fighting each other for what was available.

“My suspicion is that eventually, leaders of coastal settlements decided they needed somewhere with a more defensible position if they were to survive. This meant moving upslope, and it upended Fijian society.”

Professor Nunn, a Director of USC’s Australian Centre for Pacific Islands Research, has regularly travelled to Fiji this year to study the hillforts with collaborators from the Fiji Museum and the University of the South Pacific.

As well as investigating the geoarchaeology of the sites, Professor Nunn and his collaborators collected oral histories from elderly members of local communities.

“Unfortunately, what they could tell us was fairly limited,” Professor Nunn said. “There was a kind of cleansing of Fijian traditions when Europeans arrived, as well as a huge death toll from introduced diseases.

“Many of the stories of hillforts, passed down through the generations, simply disappeared.

“The reason we’re doing this research is because we feel it’s very important to give Fijian people their full history. History is what defines you. If you don’t know where you’ve come from, it’s very difficult to place yourself in the world.” 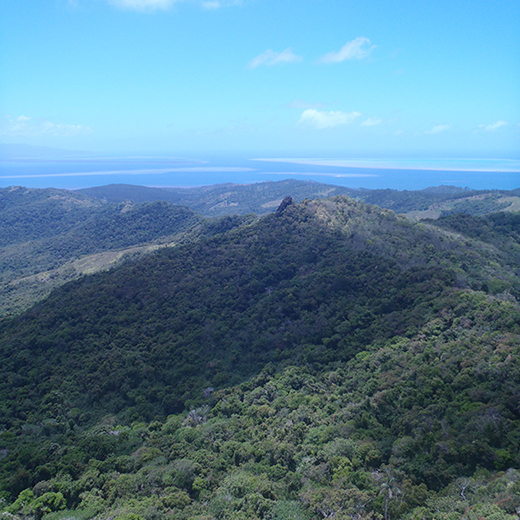