While taking a post-match ice bath has become a ritual for many elite sporting teams, a University of the Sunshine Coast researcher has found that unless the practice is personalised, it has the potential to do more harm than good.

USC PhD student Jess Stephens, 27, is based at the Australian Institute of Sport in Canberra  and has conducted high-intensity exercise tests with dozens of cyclists to determine what factors impacted the effectiveness of cold water immersion in aiding recovery.

This has led to her developing strategies to help athletes and coaches make the best use of cold water immersion by taking into account factors like gender, body fat percentage and muscle mass.

Ms Stephens said her research showed that while jumping into an ice bath after tough competition often assisted athletes to recover, the best results occurred when the process was tailored to individuals.

“Perhaps unsurprisingly, the level of body fat will impact on how people respond, but muscle mass is also a key factor,” she said.

“A high muscle mass means that trying to rewarm all of that tissue takes a lot longer, so the duration of immersion and water temperature needs to be altered. For instance, a rugby team might want to give the forwards more time in the water than the backs, who tend to have a lower body fat percentage.

“Women are also likely to need a shorter immersion duration, and their sensitivity to cold can even be influenced by hormonal changes at different stages of their menstrual cycle.”

The investigation also found that cold water immersion could be detrimental when used shortly before sports or events requiring sprint performance.

“We’ve all seen television news reports of football teams going for an ocean swim after a big match,” she said. “I think it’s a useful tool for team sport athletes to successfully get through a long season.

“There certainly seems to be a placebo effect involved as well – if an athlete believes it’s going to help them, then it quite likely will, and that’s not a bad thing.

“Conversely, there are always going to be athletes who absolutely hate it, and forcing them to do it when they’re miserable might not be the best use of time.”

Ms Stephens’ supervisor Associate Professor Dr Chris Askew said the research could make a significant difference to how the practice was used in local and international competitions.

“Jess's research found that cold water immersion just doesn’t work for some people and can actually be detrimental to performance,” he said.

“That’s critical knowledge for elite athletes, in situations where a one percent or two percent change in performance can make all the difference.

“Cold water immersion is a key part of recovery at the elite level, including the Olympics, and I definitely think this research is something the sports science community will take notice of.” 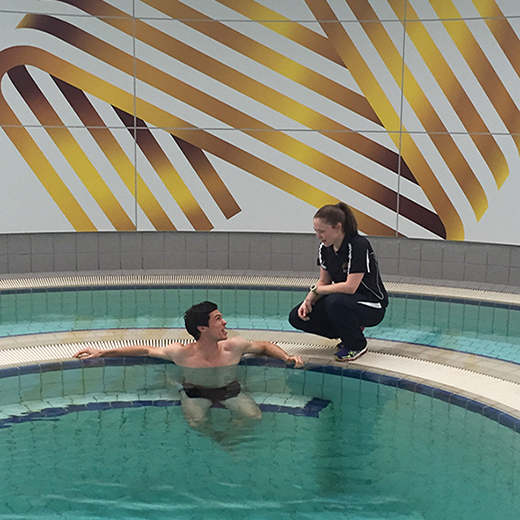