A story written by a 19-year-old Gympie student during her University of the Sunshine Coast degree has become the narration for a short film shot at Mooloolaba Beach and due to be performed at a major regional arts festival on Monday 5 September.

Ashleigh Alexander, who is in the second year of a Bachelor of Creative Writing, was invited to participate in the Art of Storytelling event as part of the Horizon festival of arts and culture at venues across the Coast from Friday 2 September to Sunday 11 September.

The movie she narrated, titled ‘Salt Water’, will be among the montages and films showcasing local community stories from 6.45pm on Monday in the travelling Pod Lounge at the USC Gallery.

The Pod Lounge, which is taking free Art of Storytelling events to various regional venues, will be at USC’s Sippy Downs campus from 4.30pm that day. It will feature several people with USC links, including a piano performance by Law student Jordan Belor and a reading by Creative Writing Honours graduate and History tutor Gil Douglas.

Andrea Dudley, a USC Creative Writing Honours graduate who mentors Ms Alexander at USC’s Buranga Centre, said it was a well-deserved and wonderful opportunity for the talented Indigenous student.

Ms Alexander recently worked with Drift Pictures at Mooloolaba Beach to capture the story she created especially for the festival. Filming included a drone flyover.

“My story is about a young boy named Luke who is dealing with the harsh reality that his mother is dying,” she said.

“He finds sanctuary at the beach near his home, especially when the sun is rising or setting. There he remembers the Dreamtime story of the Dolphin Children.”

She said she was honoured and excited to participate in the festival, and hoped to achieve a career in writing, journalism or screenwriting. 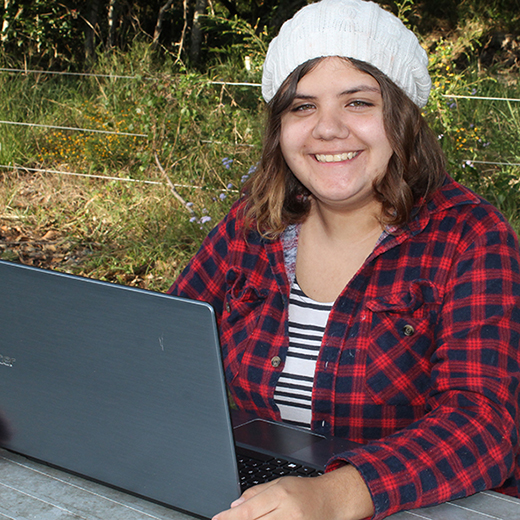