University of the Sunshine Coast student Tracy Hardy has a vision for better health for Indigenous Australians – and her efforts to achieve this have earned her a national award.

The award, which included $1,000 prize money, recognised Tracy’s efforts as chair of IAHA’s student representative committee, as well as her active promotion of Aboriginal and Torres Strait Islander health initiatives.

Tracy, a Kamilaroi woman, has been heavily involved in projects to boost the rate of Indigenous Australian workers in allied health professions, including dietetics.

“Aboriginal and Torres Strait Islander people make up less than one percent of the allied health workforce, so we’ve been trying build that rate and build the cultural responsiveness of people outside that background,” she said.

“Allied health accessibility isn’t just about whether someone can physically get to a service. It’s also about whether they feel culturally safe in that environment.”

Tracy will next year undertake her final-year Honours thesis on the cultural safety of a chronic disease self-management program for Indigenous Australians.

The former beauty therapist, who has an 11-year-old daughter, said she planned to pursue a career in public health nutrition policy at the completion of her degree.

“A lot of the chronic disease experienced by Aboriginal and Torres Strait Islander people is nutrition-related, so I think that’s an area where a lot of difference can be made,” she said.

“We can put everything in place at a grassroots level, but if there’s no policy or funding to support that at a higher level, it’s difficult for those initiatives to be sustained.

“2016 was a really big year for me, between being a mum, studying, working and holding my role with IAHA. Navigating all that was a challenge, but I had tremendous support and it was so worth it.” 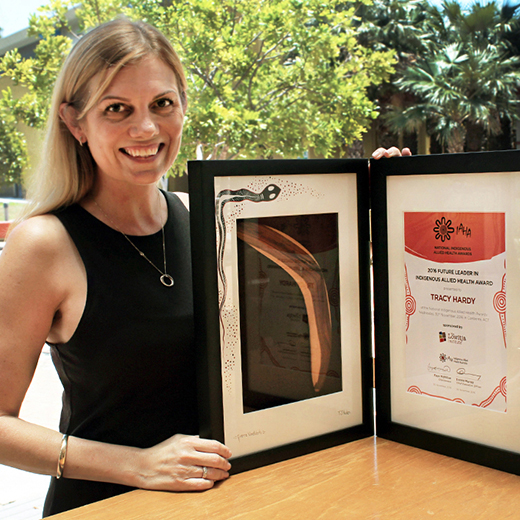