One of Australia’s most recognisable science commentators, Dr Karl Kruszelnicki AM, is about to be recognised in a new way by the University of the Sunshine Coast.

The author, media personality and public speaker already has multiple degrees and national awards but will receive his first Honorary Doctorate at a ceremony at USC’s Sippy Downs campus on Friday 26 February.

“I am thrilled to accept the award of Honorary Doctor of the University of the Sunshine Coast,” said Dr Kruszelnicki from his office at the University of Sydney’s School of Physics, where he is The Julius Sumner Miller Fellow.

“Even though they call me Dr Karl, I’m not a real doctor,” he said. “I’m only a medical doctor, which you get by doing Bachelor degrees in medicine and surgery.

“My highest degree is a Master of Biomedical Engineering, from when I designed and built a machine for (ophthalmologist) Fred Hollows to pick up electrical signals off the human retina to diagnose certain eye diseases. So getting a PhD means I cannot tell a lie when I call myself Dr Karl.”

The ceremony will be a highlight of the University’s 20th anniversary launch that day, which will see USC reflect on the two decades since it first opened and gear up for the next 20 years.

Media are invited to the ceremony at USC on 26 February from 5-7pm.

Hundreds of guests will attend the lecture by Dr Karl, a 2012 National Living Treasurer, 2006 Member of the Order of Australia and 2003 Australian Father of the Year. (He also has his own planet, 18412 Kruszelnicki, named after him.)

USC Vice-Chancellor Professor Greg Hill said the honorary award for excellence in science communication was based on Dr Karl’s 30-year career providing expert commentary across Australian media, starting with his founding in 1985 of ABC-TV science program ‘Quantum’ (replaced by ‘Catalyst’).

“Dr Karl is one of the nation’s best-known science commentators, popularising key scientific questions and inspiring curiosity and interest in science among generations of Australians,” Professor Hill said.

Dr Karl previously visited USC in 2009 to address a science conference at its Innovation Centre. He currently appears on Channel 7’s ‘Weekend Sunrise’ program, ABC TV and national radio shows, writes weekly columns for major print media and has more than a quarter of a million Twitter followers.

He has written 38 books, from ‘Great Moments in Science’ in 1985 to last year’s ‘Short Back and Science’.

“I love the kangaroos on the campus at USC and I think the Sunshine Coast is an interesting region made up of separate parts – the narrow coastline, the broader agricultural land, and the hinterland,” he said.

His lecture at USC on 26 February will discuss the past, present and future, including the importance of all education. “Science is a part of it.”

Other activities that day will include the official launch of the USC 20th anniversary book, ‘Visions’, written by USC staff member Julie Schomberg, and the unveiling of a Graduate Walk with 400 named pavers bought by graduates as a fundraiser. 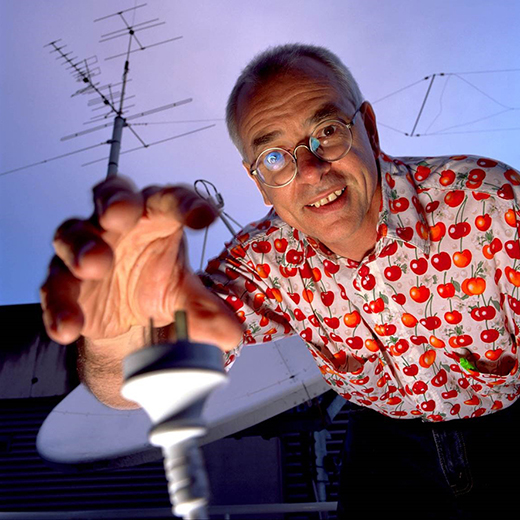