A two-year project to capture the heart of the University of the Sunshine Coast’s history through transformational stories of its people has resulted in the publication of a new book, ‘Visions’.

The coffee table book mentions hundreds of people connected to the University since it opened 20 years ago and features more than 400 images, from new professional photographs to treasures from personal and USC archives.

Author Julie Schomberg, a USC staff member and graduate, said the book included 140 interviews with past and present students, staff and community members to personalise the achievements and challenges of one of Australia’s fastest-growing universities since 1996.

“This project was an opportunity to track down some extraordinary stories and explain what USC is all about, particularly for readers who haven’t seen its growth or realised its impact,” said Ms Schomberg, a journalist of more than 20 years.

Vice-Chancellor Professor Greg Hill will launch the book, designed by Rebecca Cundy of USC’s Office of Marketing and Communications, at the 20th anniversary celebrations on campus at Sippy Downs tomorrow, Friday 26 February.

Professor Hill, who joined USC in 2005 and became Vice-Chancellor in 2011, said the 14 chapters of ‘Visions’ reflected different themes of the University’s development, from innovation and sustainability to research and partnerships.

“The book also forecasts our future, just as we’re expanding interstate to Melbourne and north to the Fraser Coast, starting work on new health research institutes, and planning a huge new campus in the Moreton Bay region by 2020,” he said.

Published by the University of the Sunshine Coast, it is on sale for $24.95 at the Co-op Bookshop on campus at Sippy Downs, call 5430 1205 or email usc@coop.com.au.

Emeritus Professor Paul Thomas, USC’s founding Vice-Chancellor until 2010, said he was delighted at the book’s readability and accessibility to everyone, not just University insiders.

“The stories in here are vivid reminders of people and events, and are melded well to balance the deeply personal with the factual history,” said Professor Thomas, who now chairs the Sunshine Coast Hospital and Health Board.

USC now has more than 12,000 students enrolled, more than 1,000 staff and more than 15,000 graduates taking their skills and knowledge around the world. 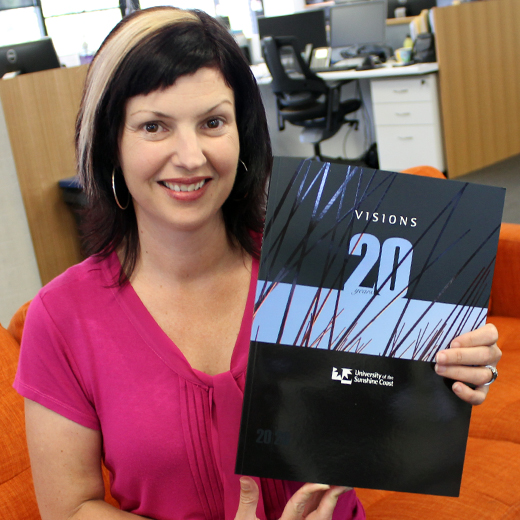