A University of the Sunshine Coast researcher who has developed an app to help people become happier has won USC’s annual Three Minute Thesis competition.

PhD student Paula Loveday was judged the best of seven Higher Degree by Research contestants after outlining her research into the Best Possible Selves (BPS) activity, a positive psychology exercise that gets participants to imagine their lives working out in the best possible way.

The Engage Research Cluster researcher won a $1,000 cash prize and will represent USC at the Asia-Pacific Three Minute Thesis competition in Brisbane in September.

Paula explained in her three-minute presentation that she had developed an app to help people conduct the Best Possible Self meditation through an easy writing task.

Runner-up was Jacqueline Burgess, also of the Engage Research Cluster, who discussed the serious implications for video game developers who antagonise their fans.

The competition was one of several held for USC researchers as part of its annual Research Conference this week that had the theme ‘Local Research, Global Impact’.

The top prize in the Minute to Win It competition for USC academics went to Senior Lecturer in Exercise Physiology Dr Colin Solomon for his presentation called ‘Happily Doing Research’ about the wellbeing of Higher Degree by Research students at universities.

An honourable mention went to Professor of Geography Professor Patrick Nunn who has researched ancient Indigenous stories of sea-level rise and how these can inform current sustainability efforts.

Another highlight of USC’s Research Conference was a public seminar on Wednesday evening that outlined how research can give a competitive edge to elite athletes, including those attending the 2016 Rio Olympics and Paralympics.

Six leading USC sports researchers discussed various topics including: what elite athletes eat and drink; how they try to prevent injury; how they psych themselves into a winning state of mind; how they deal with the media spotlight; different stages of training; and strategies for recovery. 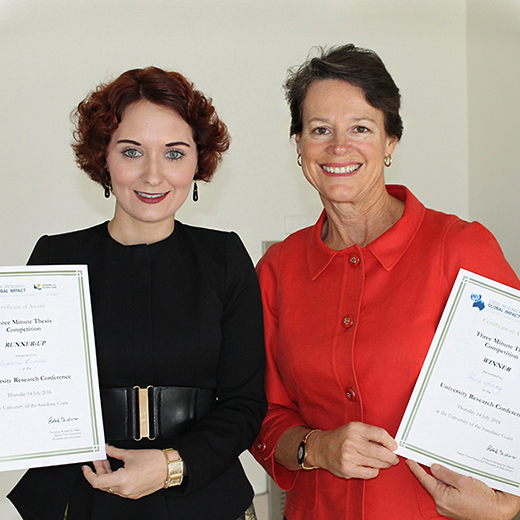