Six University of the Sunshine Coast students have returned from a work placement in Vanuatu where their efforts have helped improve the life of a teenager with a disability.

Five Occupational Therapy students and an Exercise Science student travelled to a remote village on the island of Santo to deliver a rainwater tank to the home of a 17-year-old girl who is unable to walk due to having a congenital condition that affects her joints.

She previously needed to crawl 2km each day to access fresh water. But the work of Rylee Bradford, Alice Curtis, Katie McEvoy, Jacqui McGrory, Stephen O’Regan and Sam Sallway has made that journey a thing of the past.

After hearing about the young woman’s situation from her OT lecturer, fourth-year student Rylee Bradford approached the Bribie Island Lions Club to help raise funds for the water tank.

“For me, it was a really heartbreaking and eye-opening story,” Rylee said. “It was clear that having access to fresh water would make a huge difference for this young lady.

“The Bribie Island Lions were very welcoming and open to the idea of helping out with fundraising sausage sizzles and they ended up donating $400 for the project.

“Delivering the tank was one of the best and most memorable experiences of the Vanuatu trip.”

The six USC students and Lecturer in Occupational Therapy Dr Ann Kennedy-Behr spent a day travelling to the remote area to hand over the tank.

“I don’t think they realised what a difference we would be making until they were there on the ground and saw the girl’s reaction,” Dr Kennedy-Behr said.

She said the experience was one of many highlights of the students’ seven-week placement, in which they worked with partner organisation Medical Santo in the country’s south.

“On this placement in Santo, our students really are changing lives. They’ve been doing everything from making cushions for wheelchairs to stop pressure sores, adapting wheelchairs and providing education to help people assist their family members.

“In working here, they are learning new intercultural communication and problem-solving skills that will be useful for wherever they end up working, including parts of rural Australia.”

USC will hold its annual Imaginarium and Open Day at its Sippy Downs campus on Sunday 7 August from 10am to 2pm. For details go to: www.usc.edu.au/imaginarium/ 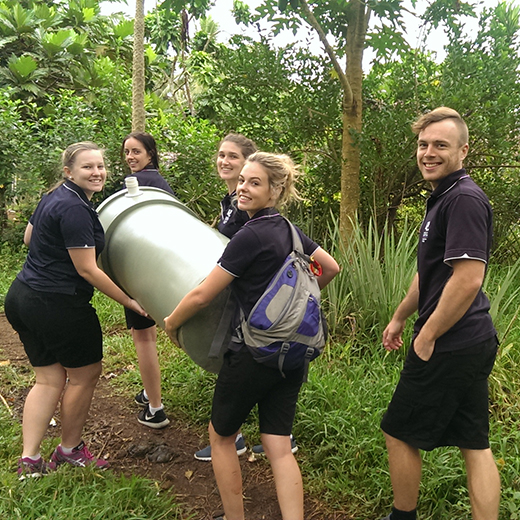