Explaining the complexities of molecular virology is no easy task, says USC researcher Joanna Kristoffersen, especially when it’s attempted in the time it takes for a party sparkler to burn.

The Science (Honours) graduate will present her research on a rapid diagnostic test she has developed for the deadly Hendra virus at the Queensland finals of the Fresh Science competition on 18 July at the Queensland Museum in Brisbane.

The public event will see Ms Kristoffersen go head-to-head against nine other early-career researchers who are each required to explain their discoveries within a few minutes.

Ms Kristoffersen said she was excited to get the word out about the rapid, potentially mobile diagnostic test she is developing for Hendra, a rare disease which has proven deadly for both humans and horses.

“Currently, if an owner has a horse that’s ill, a vet will have to attend the property, take samples from the horse, and send them off for testing at a centralised, accredited facility in Brisbane, which can take several days,” she said.

“The horse might only have something simple to treat, like colic, but the vet can’t get in there and treat it until the test comes back as negative.

“Our test will reduce that waiting period and potentially improve animal welfare. It will take less than 10 minutes to get a diagnosis, and we’re hoping to develop a device that vets or biosecurity officers can take out to use on site.”

Discovered in 1994, Hendra virus is found only in south-east Queensland and NSW and has a mortality rate of more than 50 percent in humans.

“The assay could be a useful tool to help protect veterinarians and reduce suffering in horses,” Dr Macdonald said.

Ms Kristoffersen said she was delighted to find out she had been named as a Queensland finalist for Fresh Science.

“I think it will be pretty challenging to condense a fairly complex topic down to a few minutes, but I’m looking forward to it,” she said.

“I’m excited to have the platform to talk about something that I’m so passionate about. Hendra is sporadic in its outbreaks and quite rare, but we’ve seen that the results can be devastating.”

The Fresh Science ‘At The Pub’ event will be held from 7pm to 8pm at the Queensland Museum’s Collectors Café on the corner of Grey and Melbourne Streets, Brisbane.

More information can be found at www.freshscience.org.au. 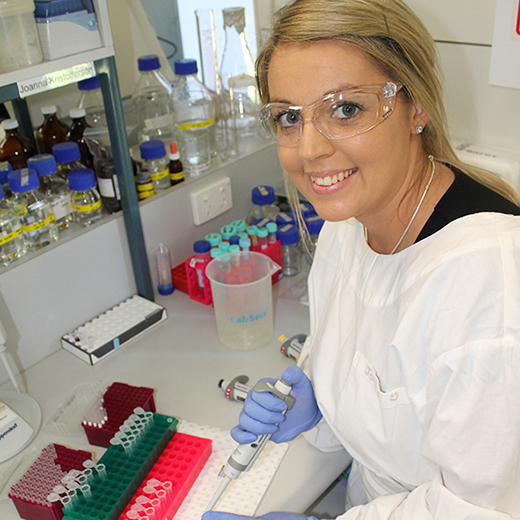