A fascination for frogs has turned into both a career and an environmental crusade for University of the Sunshine Coast science graduate Jono Hooper.

Frogs are the focus of Jono’s work as an environmental scientist with local consultancy Future-Plus Environmental, and he is also “speaking up for frogs” as the President of the Queensland Frog Society.

The 2010 Burnside State High School captain said his interest in frogs grew into fascination while studying frog ecology as part of his USC Science and Honours degrees, completed in three instead of four years.

Not just content to conduct research on frogs – in particular the threat of urban development on the local Wallum Frog – Jono also took up their cause.

“As president I’m able to become more involved with the society, frogs and networking with other people who also appreciate frogs as much as I do,” Jono said.

“Attending events, setting up displays and running workshops are some ways we can speak up for frogs as we educate the community about frogs and what people can do to help.”

He said the annual World Environment Day served to remind people to appreciate the important role that frogs played in our world.

“Frogs are amazing animals and utilise a variety of habitats one wouldn’t expect,” he said. “Their presence can also indicate the health of the environment, as their permeable skin is often susceptible to pollutants.”

Jono said his work at Future-Plus Environmental allowed him to utilise his passion and knowledge of frogs by taking lead roles in frog monitoring, surveys and relocation of frogs and tadpoles from creek systems.

“I also provide advice and feedback to clients regarding the best approach on how to manage threatened frog species, such as the Wallum Frog and other endangered frogs.”

Jono said working to protect frogs impacted by infrastructure projects was one of the most interesting aspects of his role.

“We often find the same frogs back at the same locations we have safely relocated them from a couple of nights before,” he said. “This gives us valuable understanding into frog movements.” 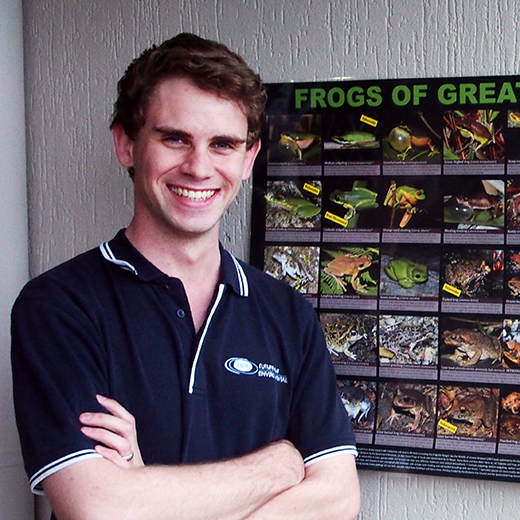