Starting new jobs together at Gympie Hospital is not the only special connection shared by three graduate nurses from the University of the Sunshine Coast.

Katherine Sellick, Kitrina Smedes and Jaidyn Lorensen were also among the first Bachelor of Nursing Science students to graduate from USC Gympie earlier this year.

Kitrina and Katherine are now working as acute services nurses, while Jaidyn is employed at the hospital’s renal unit.

“As well as the Gympie Hospital graduates, Georgie Osborne is employed at Little Haven Palliative Care, Sue Smith has a job at Cooinda Aged Care, while Crystel Schuchmann is a nursing laboratory technician at USC Fraser Coast,” Mrs Edwards said.

“It has been a great pleasure to see this small cohort move through the program as the first full-time students to enrol when USC opened its Gympie campus in 2013, and transition successfully to find work locally as registered nurses.

“I think it is really important that people who have aspirations of higher education have the opportunity to study in their local area, and can then give back directly to their community.”

Kitrina, who had spent 20 years running a horse stud and raising a family in the Gympie area, said she was thrilled to be working at the Gympie Hospital.

“Being offered the graduate program at the local hospital was a dream come true after a lot of hard work, and I feel privileged,” she said.

“With the Sunshine Coast University Hospital set to open in April 2017, the high number of nursing graduates this year reflects the growing need for nurses in the region,” Ms Ferguson said.

“The SCHHS is a major employer of new graduate nurses, and we play a key role in the development of the nursing profession.”

Nursing Science is the most popular study program at USC Gympie, with mid-year entry now open for Semester 2 this year. 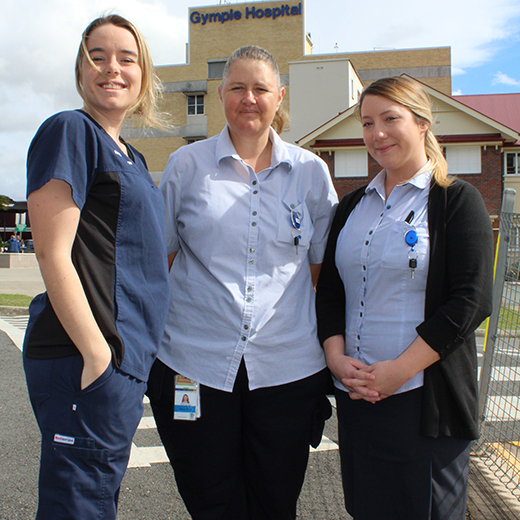