Karate kicks put to the test in USC research - University of the Sunshine Coast, Queensland, Australia

A University of the Sunshine Coast researcher with a black belt in karate has leapt from the dojo to a biomechanics lab for a new research project into martial arts techniques.

PhD candidate Colin Gavagan, who is a third dan black belt in Uechi-Ryu Karate, is comparing the technical differences between punches and kicks at full force with those used in points sparring competitions.

Combining biomechanics and skill acquisition, the four-year project will see study participants perform a range of techniques on an immovable target, a flexible target, and finally, in a sparring match against an opponent.

Mr Gavagan said he expected to discover significant differences in the techniques used by competitors in point sparring matches, in which only light contact is permitted, compared with “full throttle” kicks and punches.

“We’re hoping to find there’s some difference in the way people use their bodies to do those techniques in different situations,” he said.

“Points sparring is vastly different from what people learn in traditional Karate in the dojos. In points sparring matches, which include the international competitions, the rules limit the force and the body parts that can be targeted.

“Some people might practice all day on a static target, but we want to see if those moves are actually helpful when the target is moving and is likely to hit back.

“The research will provide clear-cut evidence of the best way for fighters to train for competitions.”

Mr Gavagan, who grew up in Namibia, has been training in the traditional Okinawan karate of Uechi-Ryu since 1997.

The Sippy Downs resident said the idea of taking his passion for martial arts into the academic sphere first emerged during his undergraduate studies.

“I was doing a Bachelor of Sport and Exercise at USC, and in one of my first biomechanics classes, they took us into the Biomechanics Laboratory,” he said.

“I looked at all the testing equipment and technology and just thought, ‘wow, look at these toys – I want to get a karate study in here’.

“I did an Honours project comparing the kicking techniques used by Muay Thai, taekwondo and karate competitors, and now I’m doing my PhD in the same area.” 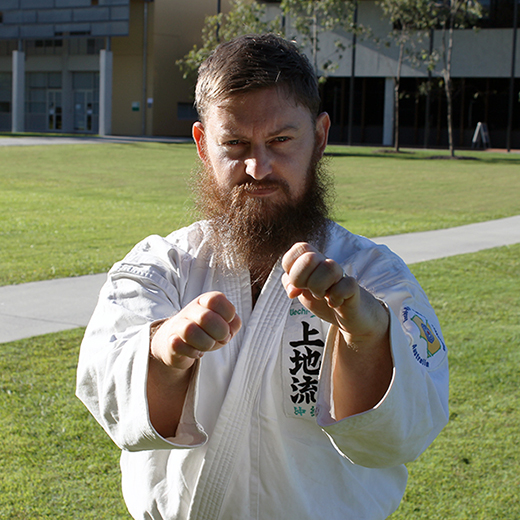 Bachelor of Sport and Exercise Science Doctor of Philosophy