A University of the Sunshine Coast oyster researcher is hoping to use aquaculture to improve the lives of people in some of the world’s poorest areas.

PhD student Nikoleta Ntalamagka of Greece is in the final stages of a three-year research project into pearl oysters and is using her aquaculture expertise to help international not-for-profit organisation Aquaculture without Frontiers (AwF).

Ms Ntalamagka, 28, is now coordinating an international student network for the group, which uses aquaculture projects to help alleviate poverty in developing countries.

She said her engagement with AwF began at a conference in Indonesia, where she had presented her idea for a simple aquaponics system to produce fish and plants in refugee camps.

“It’s very easy to maintain and doesn’t require fertiliser,” she said. “In the system, the by-products of the fish are utilised by the plants as nutrients, and the water is then recirculated into the system. It’s very sustainable and it could help refugees learn some skills they can use when they are permanently settled.

“Aquaculture projects work well for poverty alleviation because they generally require minimal resources to set up and minimal training or education to maintain them.

“I think that developing an aquaculture system that made a real difference to people in need would be incredibly rewarding.”

Ms Ntalamagka said students from all disciplines could use their skills and knowledge to help the activities of AwF.

As well as using online channels to recruit students from around the world to the organisation, Ms Ntalamagka is preparing to submit the final results for her PhD in August.

She said her research project, which included extensive field testing, had discovered a way to influence the reproduction cycle of pearl oysters.

“Pearl producers want to produce large numbers of high-quality pearls, but to do that you need to boost production of the oysters themselves,” she said.

“Even though the end goal might be about the pearl itself, I’ve focused on the animal and trying to use genetics to influence their production cycle, maturation and sex.

“If we can control all these factors, then eventually the oysters will produce a better pearl.” 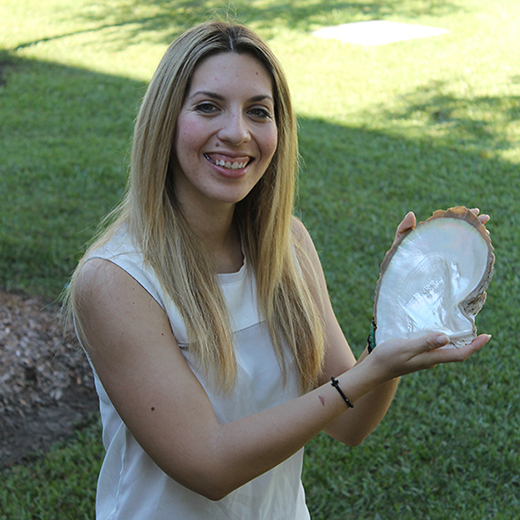