A University of the Sunshine Coast graduate is on target to become one of Australia’s top archers following a strong performance at the recent World University Archery Championships in Mongolia’s capital city Ulaanbaatar.

Chloe Grabs, 21, who graduated from USC in April with a Bachelor of Sport and Exercise Science, finished as the most successful Australian woman at the event, in 33rd place, and contributed to a team finish of ninth overall for Australia.

The Nambour resident, who picked up a bow for the first time only four years ago, said the experience of competing against some of the world’s top archers in Mongolia from 1-5 June had been unforgettable.

“Most of the competition was held at the National Stadium, but the finals day ran in Genghis Khan Square in the city’s centre, with grandstands set up and the archers shooting in the middle,” she said.

“I had a few issues with equipment, so my ranking wasn’t the best. But I still did some good shooting which helped us out a lot in the teams event.”

Chloe’s training regime involves practising archery for about 30 hours per week, along with strength training at the USC Gym and meditation and mental imagery training.

The talented athlete said she had been well-supported by the University during her Sports Science degree and planned to return to USC in 2017 to study a Diploma of Education.

“It is a lot of work to manage sport and study but I’ve embraced it,” she said. “To be able to study and match it with the top archers in the country has been pretty cool.

“Many of my tutors in the Sports Science program came from a high-performance sport background, so they knew what I was going through.

“My graduation day in April was memorable. I received my degree then flew out a few hours later to Tonga for the Oceania Championships and Olympic qualifying events.”

Chloe, who will return to USC next year to study a Diploma of Education, now has her sights set on the 2017 World Archery Championships in Mexico City. 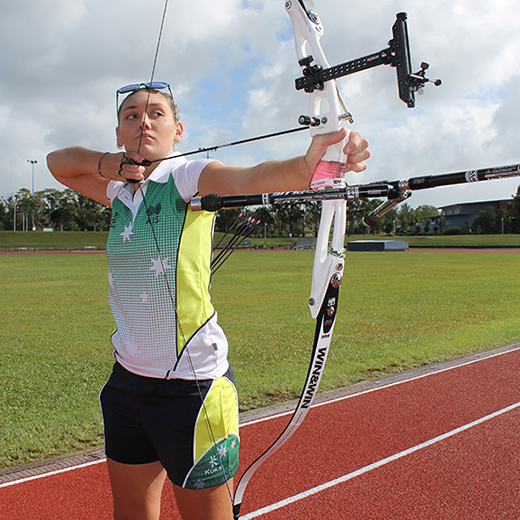