The University of the Sunshine Coast will send its first team of student athletes to the Indigenous Unigames, to be held in Brisbane next week (26-30 June).

The team of 10 Indigenous students, including one from USC’s Fraser Coast campus, will compete in four different sports against students from more than 20 universities around Australia.

The event, which celebrates Aboriginal and Torres Strait Islander culture, will see students line up in mixed-gender games of touch football, netball, basketball and volleyball and a traditional Indigenous game.

Third-year student and team captain Luke Cosgrove said the Indigenous Unigames was a great chance for some of USC’s Indigenous students to support each other through sport.

“There’s a lot of excitement within the team as its USC’s first appearance at the Games,” he said. “It’s a great space to communicate openly and freely with our fellow Aboriginal and Torres Strait Islander students while having some fun competition.

“We’re hoping to surprise our rivals with the pockets of hidden talent in our team.”

The competition is being held at the Brisbane Entertainment Centre and Australian Catholic University’s Brisbane campus at Banyo, and will begin with an opening ceremony on Sunday, followed by four days of sport and social activities.

USC Sport Coordinator Gary Moore said he believed the team would do well, particularly in touch football and basketball.

“It’s a tight-knit group and they’ve been training hard to prepare for the event,” Mr Moore said. “It will be a great opportunity for them to be wearing the USC Spartans colours out there and compete alongside Indigenous students from around Australia.” 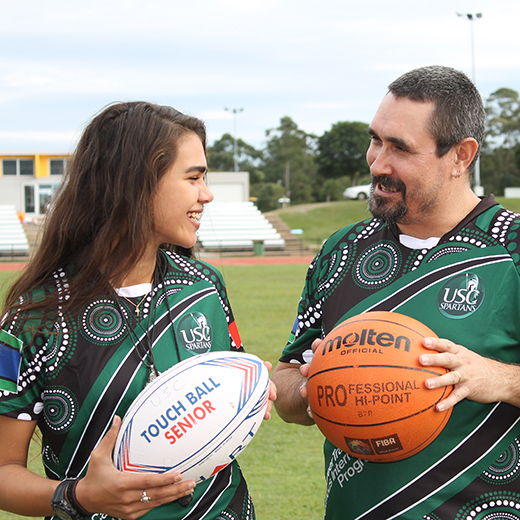