One of the first Sport and Exercise Science students at the University of the Sunshine Coast in 1999 is in the thick of the National Rugby League action this season as he feeds state-of-the-art analysis to legendary Broncos coach Wayne Bennett.

USC graduate Scott Barker will again be a regular in the coaches’ boxes as Head of Performance Analysis for both the Brisbane and the English National teams, having worked his way up from volunteering at training at Red Hill soon after Year 12 in Brisbane.

“I’ve been very lucky to work at the highest levels in rugby league, with some of the best players and coaches of all time, and to be involved in big tournament wins,” recalled Mr Barker in ‘Visions’, a new book published by USC.

It all started with a letter Mr Barker wrote to Mr Bennett years ago, followed by determined juggling of work and USC studies and the mentoring of USC Professor of Sport Science (Biomechanics) Brendan Burkett.

“When digital video came into the market, I helped develop some software for a league version that’s now used in all 16 clubs,” Mr Barker said.

Wayne Bennett recalled: “Scott showed he was never afraid to try new things to improve the performance of the team or player. He has been an innovator in the area of sports technology”.

While Mr Barker is keeping his cards close to his chest about Brisbane’s tactics for 2016, the Broncos will be aiming to go one better this year after such a close contest last year.

He said they were also looking forward to getting back into the season after a long and arduous pre-season which included trips to the New Zealand, Bundaberg and the UK.

‘Visions’ was recently released to celebrate USC’s 20th anniversary this year and features more than 140 stories of student, graduate, staff and community success. 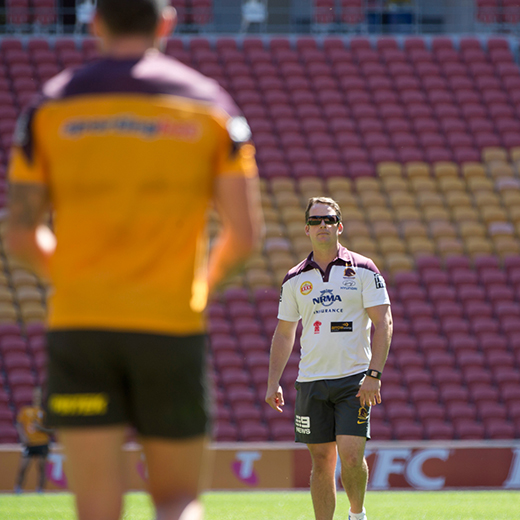