University of the Sunshine Coast academic Shelley Davidow had to revisit some of humanity’s darkest moments to write her new memoir, which will be officially launched tomorrow (Thursday 17 March).

The book, titled Whisperings in the Blood, traces the immigrant journeys taken by four generations of Ms Davidow’s family as they fled the Holocaust, the Great Depression and South African apartheid.

Whisperings in the Blood will be launched at the University of the Sunshine Coast Gallery at 1pm on Thursday 17 March. Media are invited to attend.

Ms Davidow, who wrote the memoir as part of her Doctorate of Creative Arts at USC, was inspired to begin the project in 2012 after inheriting a box of letters that had belonged to her grandmother.

“When I was a child my grandmother used to tell me stories from her life, about how she’d left America and had come out to South Africa to marry a man she’d never met,” Ms Davidow said.

Ms Davidow’s grandmother, Bertha, grew up in an orphanage in Ohio, after her own father fled to America from Lithuania to escape the persecution of Jewish people across Eastern Europe.

“Living in an orphanage during the Great Depression, she really had nowhere to go when she graduated from school at 16,” Ms Davidow said. “And then imagine: someone offers her free passage across the world, and the promise of a better life. So she takes that offer.

“As I read the letters I realised that her journey from America to Africa was mirrored by my own journey from South Africa back to America decades later.”

“That’s where the title Whisperings in the Blood comes from,” Ms Davidow said. “We all think we’re living these amazing individual lives, making unique snap decisions about the future, when we might be tracing maps of journeys that have been made before us.”

Ms Davidow now lives in Noosa and teaches Creative Writing at USC. While she has written 40 books, including children’s fiction and non-fiction works, she said writing such a deeply personal work was a different experience.

“I had my whole heart in this story,” she said. “Not just because it’s mine, but because it’s my family’s, and at a time when we’re dealing with issues like immigration, refugees and displaced peoples, I feel the idea of so many of us being immigrants to some degree is important.
“We all want a safe place to live. And that was a very personal feeling for me, because I also left South Africa hunting for a safe place.

“So these voyages my ancestors took are really not unique at all; they represent the essence of all journeys we make as human beings seeking safety.”

USC Professor of Creative Writing Gary Crew, who was Ms Davidow’s principal supervisor, said the book’s publication through University of Queensland Press, a major publisher, was an excellent achievement. 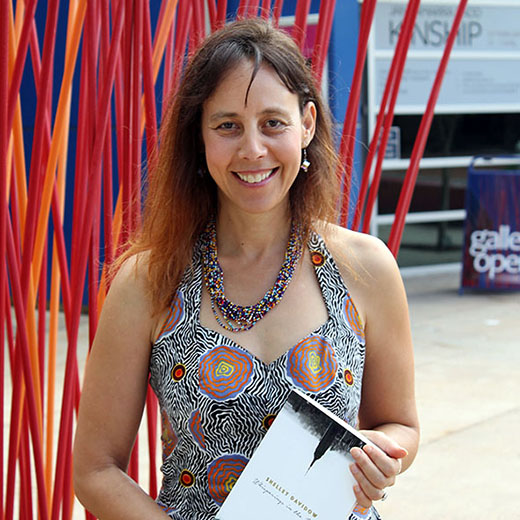