In the rush of media coverage following a terror attack, panic can drown out the voices of reason in Western countries, says a University of the Sunshine Coast researcher.

PhD student Saira Ali is investigating the differences in how journalists in countries with a mainly Muslim population report on terrorism events, compared with coverage of such events in Muslim-minority nations.

The project will examine the response of the news media to four recent attacks: the Paris terror attacks in November 2015, Sydney’s 2014 Lindt Cafe siege, the 2014 Peshawar school massacre in Pakistan and the Jakarta attacks in January 2016.

Ms Ali, from Pakistan, said the anxiety created by the Lindt Café siege had led to inaccurate and reactionary coverage in some sections of the Australian news media.

“The investigative part of journalism tends to be overlooked in the coverage of terrorism, because the focus is on providing constant updates,” Ms Ali said.

“We need to be very wary of the 24-hour news cycle, because the information that comes through is not always accurate and can actually be very harmful.

As part of her three-year project, Ms Ali will examine the news and social media coverage of the four terrorist attacks, as well conducting in-depth interviews with five journalists in each of the case study countries.

“Muslim-majority countries actually experience more terrorist incidents at the hands of Islamic extremists, and I wanted to see the difference in how they were viewed by the media,” Ms Ali said.

“The narratives projected by the media play a huge role in shaping societal opinions, and in Western societies we have seen Muslims and Islam become associated with terrorists.

“Terrorism events are highly distressing and they should certainly be reported on. The problem arises when events are constantly reported, and the media fixation on ‘what if’ scenarios helps build up a culture of fear within society, which doesn’t really help anyone.” 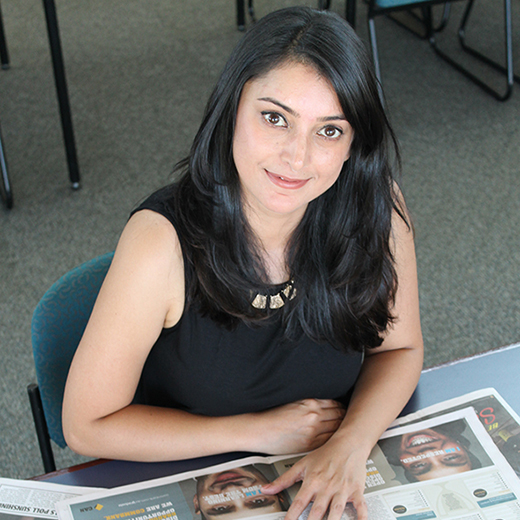