University of the Sunshine Coast Engineering graduate Scott Roy has won the Australian Water Association’s Undergraduate Water Prize for his ground-breaking flood mitigation project. It is believed to be the first time a USC student has won the national award.

Mr Roy, who graduated in April with his USC Bachelor of Engineering (Civil) (Honours), received the award at a presentation dinner in Melbourne on Wednesday night.

USC Senior Lecturer in Environmental Engineering Dr Helen Fairweather said, “Scott won the Queensland division award last year, which put him in the Australian finals. This is a major award for any student, and puts USC in the limelight.”

The AWA prize aims to encourage and reward students for excellence in the field of water studies and research, and provides a forum for students to display their academic excellence and research findings to future employees, clients and the water industry.

Mr Roy, 42, of Parrearra, developed an innovative floating wall to prevent stormwater from flowing into underground carparks in flood events. A full-scale test rig was erected on campus at Sippy Downs.

“This floating wall design creates a seal and intercepts the water before it can go down driveways into underground carparks,” said Mr Roy, who patented the technology.

“New durable, corrosive-resistant barriers are now being built by a local company, and the Flow Defence flood barrier has received interest from a number of local developments.”

“I am excited to win this award because it means a great deal for my hard work to be recognised by my peers and the water industry,” he said.

“I am grateful to everyone involved in this project from USC and its Innovation Centre for their support including grant money and access to campus facilities.” 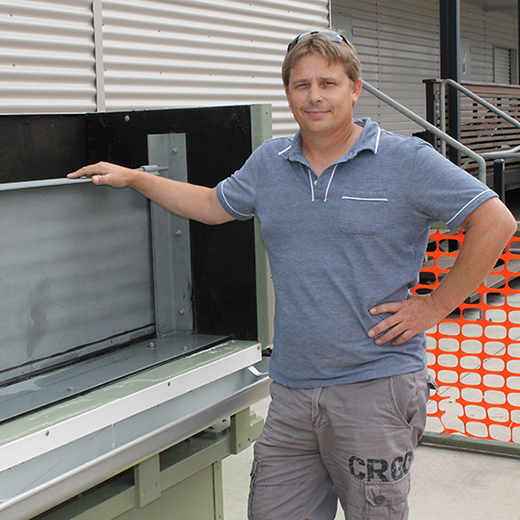