Would a person have been able to outrun a prehistoric 600kg, meat-eating goanna? That is the mystery that a University of the Sunshine Coast academic has helped solve by building a dragon from scratch as part of an international research collaboration.

Lecturer in Animal Ecophysiology Dr Christofer Clemente is the co-author of a new study with Taylor Dick of the Simon Fraser University in Canada, which has geometrically scaled up versions of the Komodo dragon.

Their work has established that Australia’s giant goannas, that have been extinct for about 60,000 years, would have been more interested in running away from humans than chasing them.

“This new research disentangles variations in the speed, muscular power and posture of animals when they get really big and gives us an insight into the performance capabilities of long extinct animals,” Dr Clemente said.

A report on the project, published recently in the journal Frontiers in Zoology, examined the hind limb muscles of nine species of lizards, ranging from the world’s smallest living monitor lizard to its largest.

“Because of this size range, monitor lizards were ideal subjects for the study which identified patterns linking the form and function of musculoskeletal design,” Dr Clemente said.

“Within a single genus, lizards vary greatly from the pygmy variety which weighs in at less than 8g, to the largest living lizard, the Komodo dragon that tops the scales at more than 40kg.”

The research investigated ways the lizards’ muscles changed to support their extra mass as they grew larger, and the impact these morphing muscles had on their ability to move.

“Unlike many other animals, lizards did not change to a more upright posture as they increased in body size, instead the muscles have to do the extra work,” Dr Clemente said.

“Lizards get faster as they get bigger but only up to a certain point, and we now know why. You can’t just scale up muscle, it has to change configuration to support extra mass, and this comes at the cost of speed.”

Geometrically scaling up Komodo dragon muscles allowed the researchers to draw conclusions about the fate of the giant goanna.

This meat-eating reptilian predator, that weighed up to 600kg and grew up to five metres long, roamed around much of eastern Australia between 100,000 and 60,000 years ago.

“We wanted to know if this giant creature could outrun early man, and by applying the evidence we have found, we know now the answer is probably not.

“There is a possibility that its slower speed may have contributed to its extinction by making it an easy target for early Indigenous hunters,” he said.

The study is likely to assist further research into muscle function and body size in animals and humans. 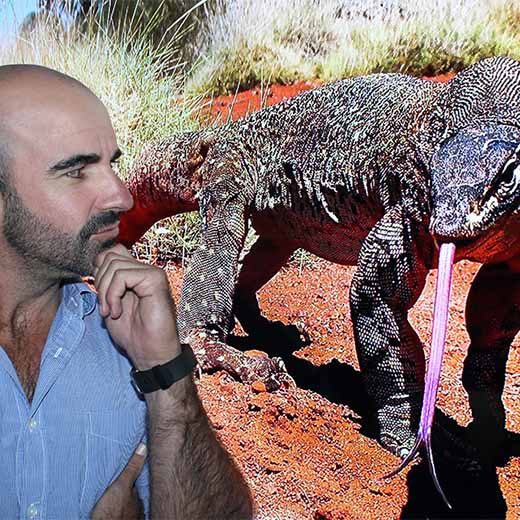