Research into the potential impacts of Mary River erosion on Kenilworth’s road infrastructure has earned a prestigious award for a University of the Sunshine Coast student.

Fourth-year USC Engineering student Andrew Lindsay, 36, was one of eight students invited to present at the recent Queensland Water Symposium, where he received the Engineers Australia Michael Woodhouse Award for the best undergraduate presentation.

It was the second year in a row that a USC student has won the statewide award.

Mr Lindsay’s presentation outlined the findings from his Honours research project, which investigated how future erosion of the Mary River bank could threaten Eumundi-Kenilworth Road.

The Kenilworth resident said he was inspired to complete the research after witnessing the impact of the 2011 and 2013 floods.

“I’ve lived in the area for eight years, and in that time I’ve seen that particular section of the river bank get closer and closer to the road,” he said.

“This project was a way to combine my interests in environmental and water engineering with a matter of concern to the local community.”

Mr Lindsay used historical data to model future erosion rates and develop a timeline of threats to the existing road infrastructure, in the hope of sparking further research into possible mitigation strategies.

“My research found that we are looking at 17 floods of 10-metre-plus height for the river bank to reach the road,” he said. “In contrast, we would need 33 floods of four to six metres to have the same impact.

“If we experience around six of the types of flood years we saw in 2011 and 2013 there will be significant risk to the road infrastructure.”

He said it was gratifying to receive an award for the project, which was the final requirement of his Bachelor of Engineering (Civil)(Honours).

“The Honours thesis is the crowning achievement of your degree, so it’s great to receive that extra recognition,” he said. 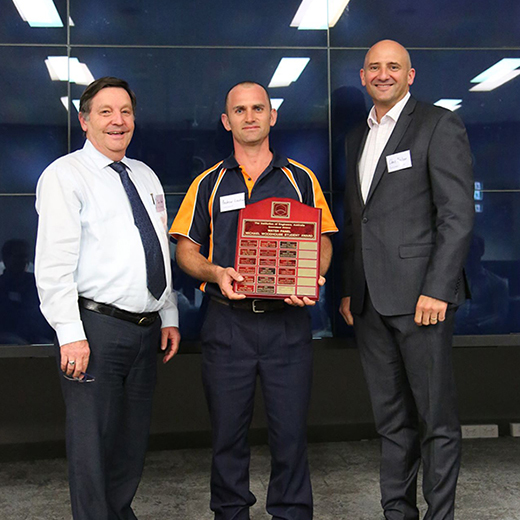