Innovative measures that have cut the consumption and cost of water and electricity and reduced waste on campus at the University of the Sunshine Coast have earned it two gongs at the 2016 Queensland Premier’s Sustainability Awards.

USC Operations Manager Dennis Frost, who attended the awards in Brisbane with USC Sustainability Officer Hailey Bolland, said the University was delighted to be recognised for implementing ideas that have saved $1.5 million in utility costs and more than 7,000 tonnes in carbon emissions in the past three years.

USC was one of three finalists statewide in the Minister’s Award for Leadership in Sustainability. (The other finalist was the Mater Misericordiae Ltd and the winner was the Mungalla Aboriginal Business Corporation.)

The University was highly commended in the Innovation in Sustainable Technologies Award.

The report on USC in the Minister’s category cited its improved operations and culture of environmental responsibility, and its management of increasing energy, water and waste costs as a result of the expanding Sippy Downs campus. 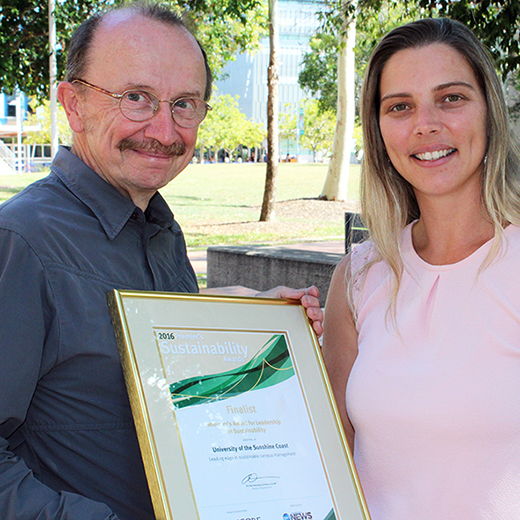