A former cook who is now a graduate teacher in Bundaberg has added football coaching to his school duties as the perfect recipe for a rewarding career.

Damien Murphy, who recently graduated from the University of the Sunshine Coast with a double degree in Arts and Education (Secondary), is working as a full-time teacher at Kepnock State High School.

The 28-year-old said he enjoyed his mix of roles as a teacher of history, English and geography and as the assistant coach of Kepnock High’s open boys’ rugby league team.

The former Maroochydore Swans player, who represented USC in rugby league at a Northern University Games, had never coached until being given the responsibility on his final two practicums at Siena Catholic College.

“The experience was such an enjoyable one that I sought out the opportunity at my first teaching position outside of university,” he said.

“Next year I will be able to engage in this further as I will be the head coach of the team, which is something to look forward to.”

The 2005 Sunshine Beach State High School graduate found a job in the hospitality industry after leaving school and continued to work as a cook while he completed a combined Education and Arts degree at USC.

Mr Murphy said he was attracted to the University by its location, smaller class sizes and facilities, including the library and 24-hour computer labs.

“It was easier to interact with your tutors and lecturers which was an amazing benefit to studying at USC,” he said.

“I was able to complete my entire degree without access to the internet at home which is something I attribute to the excellent resources provided by USC.”

Mr Murphy said the practical side of the degree, including 80 days of supervised professional experience in Queensland schools, had shaped the teacher that he was today.

“The thing I want to achieve most is to see the fruits of my labour; the experience of seeing a student excel with the gifts they have will be a great reward,” he said.

View USC’s four final graduation ceremonies for 2016. For information on studying at the University of the Sunshine Coast go to www.usc.edu.au/learn 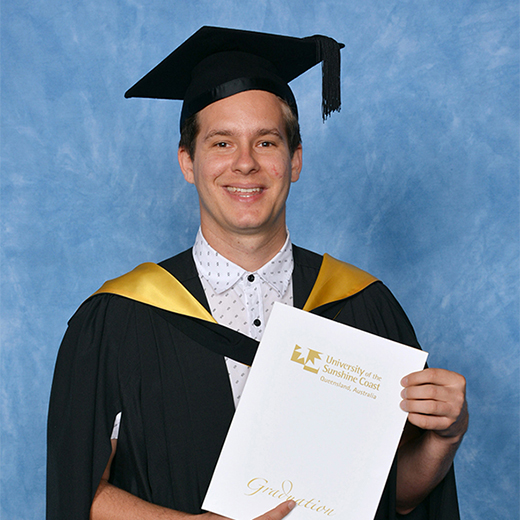