Watching his wife recover in hospital from a life-threatening infection convinced Maryborough coal seam gas worker Peter Nugent to give up his job to study nursing.

Mr Nugent, 40, is about to finish his first year of the three-year Nursing Science degree at the University of the Sunshine Coast’s Fraser Coast campus.

“I have been a plumber for nearly 20 years so this is a big change for me,” said the father of three.

Mr Nugent was working away from home on gas pipeline projects in western Queensland last year when his wife Lisa fell critically ill and was airlifted to Brisbane for urgent treatment.

“We said our goodbyes and I thought I had lost her,” he said. “I am very pleased to say she is fighting fit and very healthy, however it was my lightbulb moment.”

“As I sat by my wife’s bedside in a Brisbane hospital for nearly two weeks I would observe the way the nurses cared for the patients and I thought, ‘I can do this’.

“Having the option to study Nursing Science at USC Fraser Coast gave me the opportunity to drastically rearrange my life, and also get back home to my family where I belonged.”

He said he was finding the degree an enjoyable challenge after so many years working in the plumbing trade.

“The transition from work to tertiary study has been made much easier by the help and support of USC lecturers and staff,” he said.

“I appreciate being able to challenge my thinking with subjects such as Anatomy and Physiology and taking part in the clinical scenarios in the nursing labs.”

Mr Nugent said he was contemplating studying Paramedic Science when he graduated from Nursing Science.

“I would like to continue studying with the intention of becoming an emergency nurse or a paramedic with a flight rescue service, as I have seen first-hand the incredible job they do.”

Enrolments are open for USC’s Bachelor of Nursing Science in 2017. The popular program will be one of more than 15 undergraduate degrees offered at USC Fraser Coast next year.

New programs at USC Fraser Coast include a Bachelor of Animal Ecology and Bachelor of Tourism, Leisure and Event Management, as well as first-year courses in Science, Social Work, Counselling, Psychology and Social Science.

For more information go to www.usc.edu.au/learn 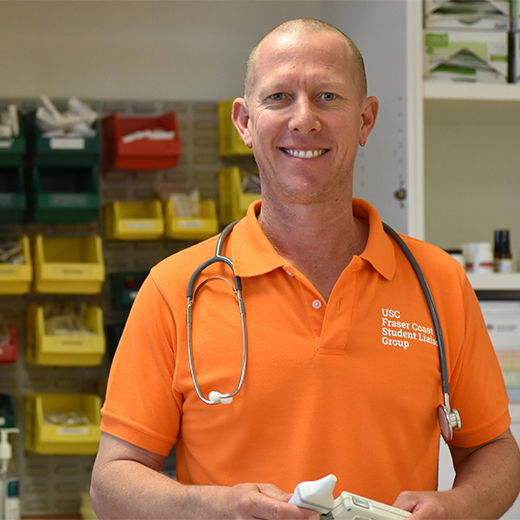