The coastal lifestyle of Hervey Bay is an added bonus for two international students who have enrolled at the University of the Sunshine Coast to chase their nursing dreams.

Surakshya and Rashmi, who did not know each other when they left their landlocked homeland to study in Hervey Bay, met on their first day of Semester 2 lectures more than two months ago.

They discovered their journeys were remarkably similar. Both women had gained a Diploma of Nursing, and had worked in hospitals in Nepal before a desire to advance their careers inspired them to pursue higher academic qualifications overseas.

“I wanted to study in Australia because its nursing education is considered one of the best in the world,” Surakshya said.

“I chose the University of the Sunshine Coast because of the standard of its Nursing Science degree, and I wanted to gain advanced practical experience in nursing homes and hospitals.”

Surakshya cared for babies in the intensive care unit of Nepal’s College of Medical Science before moving to London, where she worked as an assistant nurse with England’s National Health Service, while her husband completed a finance degree at the University of Wales.

Rashmi, who worked as a nurse in Kathmandu, said it had always been her dream come to Australia.

“It has a highly valued education system that offers better opportunities after you finish studying,” said Rashmi, who plans to begin a Master of Nursing after gaining her degree.

The women said the guidance they had received from USC staff and students had helped them adapt to new styles of teaching and ways of learning.

“I am very proud to be part of this University because everybody is helpful here,” Surakshya said. “The education system in Nepal is different but with the support of lecturers, staff and my classmates I am coping well.”

They say by far their biggest supporters are their husbands who gave up careers in Nepal to accompany their wives to Australia. Rashmi’s husband, who was a maths lecturer in Nepal, is working as a chef in Hervey Bay, while Surakshya’s husband now works in retail.

The two nurses have another ally in USC Fraser Coast Lecturer in Accounting Ratna Paudyal, also from Nepal, who has introduced them to other Nepalese students and friends.

“The beaches and the beauty of the Fraser Coast, and knowing the region had a strong Nepalese community, also attracted me here,” Rashmi said. 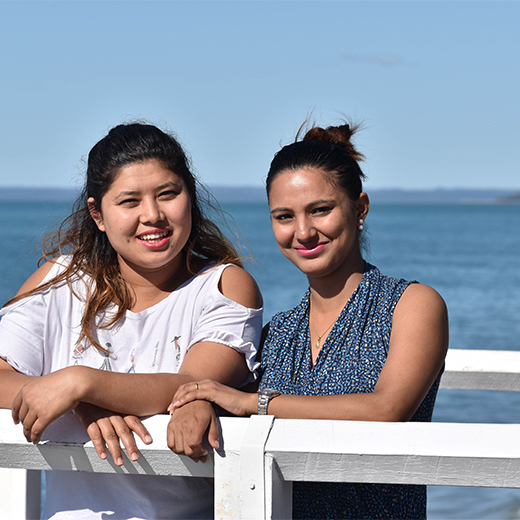