Making the long journey from his native Kenya to Australia has resulted in a University of the Sunshine Coast Medal for Nursing Science graduate Imran Manji.

Imran, 23 of Palmwoods, achieved a near-perfect grade point average of 6.9 out of a possible 7 when he graduated from USC on 29 September.

Born and raised in Nairobi, Imran moved to Canada at 17 to study a Bachelor of Biomedical Science, before deciding to move to Australia to enrol in a Bachelor of Nursing Science (Graduate Entry) at USC.

He was one of more than 400 USC graduands who received their degrees at four ceremonies held at Matthew Flinders Anglican College Performance Centre, Buderim.

Imran said receiving the University Medal in front of his parents, who travelled from Nairobi to attend the ceremony, was the highlight of his time in Australia.

“It was an exciting moment for both me and my parents,” Imran said. “I was really honoured and thrilled.

“I put in a lot of hard work to achieve the 6.9 GPA, but it really came down to having such a strong interest in what I was learning.

“I chose to study Nursing because I wanted a challenging, hands-on career where I could be making a difference in people’s lives on a daily basis.”

Imran plans to begin a nursing career in 2017, with an eye to eventually studying medicine.

After completing his first degree at a large institution in Canada, Imran said he had been drawn to USC’s smaller class sizes and friendly environment.

“I found the lecturers and tutors were really experienced and approachable, and gaining hands-on experience was such a big part of the degree.” 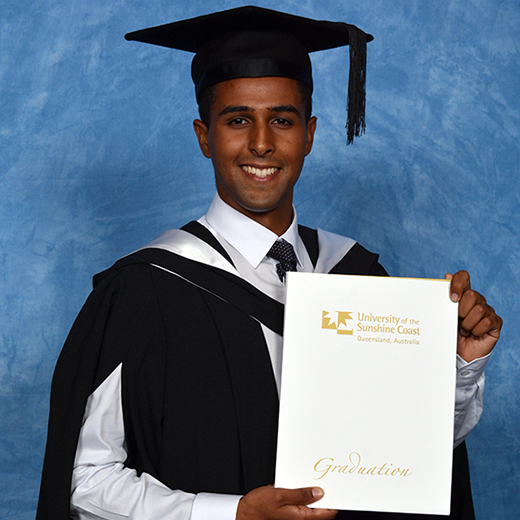