A keen mathematician whose initiatives have opened the way for students at the University of the Sunshine Coast to pursue new areas of postgraduate study has received its highest student honour.

Kathryn Hooper, 21, of Woombye, was presented with a prestigious Chancellor’s Medal when she graduated with a Bachelor of Science (Mathematics major) at a USC graduation ceremony on 29 September.

The Chancellor’s Medal is awarded to a graduating student who has made an outstanding contribution to USC or the wider community while achieving at a high academic level.

Kathryn, who achieved a grade point average of 6.81 out of a possible 7, also received a University Medal for her exceptional results and dedication to study.

The OP1 student initially enrolled in a Bachelor of Occupational Science in 2013 after graduating from Burnside State High School, before changing degrees to hone her interest in pure science and maths.

On her own initiative, Kathryn benchmarked USC’s Mathematics major and provided detailed feedback to inform curricula re-design and open the door for Mathematics graduates to pursue postgraduate options at partnering universities.

She said postgraduate qualifications, with a view to teaching and research, were next on her list of goals.

Kathryn, who contributed to USC campus life by taking part in many activities aimed at helping other students, said she was surprised and grateful to receive a Chancellor’s Medal.

“I have been a student mentor to support new students in their transition to study, and I volunteered in the Inspire program at a local high school to share the university experience with science and maths students,” she said.

She also volunteered for a PhD project in biomechanics, was a member of the Sunshine Coast Christian Students group and the Mathematicians of USC club, and continues to coordinate a youth group in her local area.

A recipient of a $12,000 Chancellor’s Scholarship for academic excellence when she first enrolled, Kathryn said the highlight of her experience at USC was the close contact and support from academic staff.

Kathryn’s siblings have shared her passion for science and USC. Her younger sister Vanessa is a first-year Biomedical Science student, while her brother Jono completed his USC Science and Honours degrees in three instead of four years and is now an environmental scientist.

The University of the Sunshine Coast held four graduation ceremonies for about 400 graduands at the Matthew Flinders Performance Centre in Buderim on 29 September. To view the ceremonies, go to http://www.usc.edu.au/learn/graduation/after-graduation/previous-ceremonies 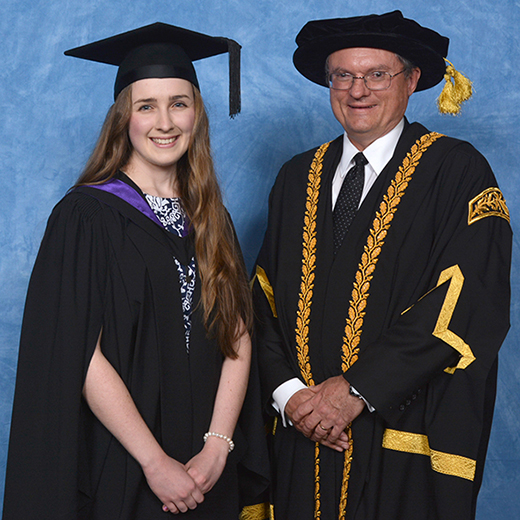