An esteemed wildlife biologist who has helped ensure the survival of the south-east Asian sun bear has become an Honorary Doctor of the University of the Sunshine Coast.

The dedicated researcher founded the world’s only sun bear conservation centre in 2008 to care for and rehabilitate orphaned and abused sun bears, as well as promote awareness of the vulnerable species.

Since 2013, Mr Wong has shared his knowledge with dozens of Animal Ecology, Public Relations, Events, Design and research students from USC who have completed internships and work-integrated learning at the Sabah centre.

Mr Wong said he was honoured that his passion and efforts towards wildlife conservation were being recognised with a USC Honorary Doctorate.

“I feel overwhelmed and thrilled to be receiving this award,” he said. “It was a big surprise.

“I founded the conservation centre because I witnessed two extreme phenomena: the spectacular lifestyle of wild sun bears in the rainforest, and the horrible living conditions of captive pet sun bears in Malaysia.
“As a wildlife biologist, I felt a strong obligation to improve the situation. I felt that if I didn’t help these animals, no one will help them.”

In addition to his conservation work, Mr Wong’s studies of sun bear ecology in the Bornean rainforest have significantly improved understanding of the bears’ life cycle and behaviour.

Tomorrow, Mr Wong and USC Vice-Chancellor Professor Greg Hill will sign a new Memorandum of Understanding between the University and BSBCC, enabling USC students to undertake work-integrated learning placements in Sabah for at least another four years.

The relationship between USC and BSBCC began when USC International’s Dr Sheila Peake visited the centre while it was still under construction. Today, the organisation cares for more than 40 rescued sun bears.

Mr Wong said USC students had played a major role in building the centre to its thriving state.

“As a non-profit conservation organisation, we have very limited funding, and without the help from USC, we would not have been able to achieve what we have today,” he said.

“I would like to thank the Vice-Chancellor Professor Greg Hill and all the USC staff who have been helping us. I hope the partnership between USC and BSBCC can continue to benefit both institutions.” 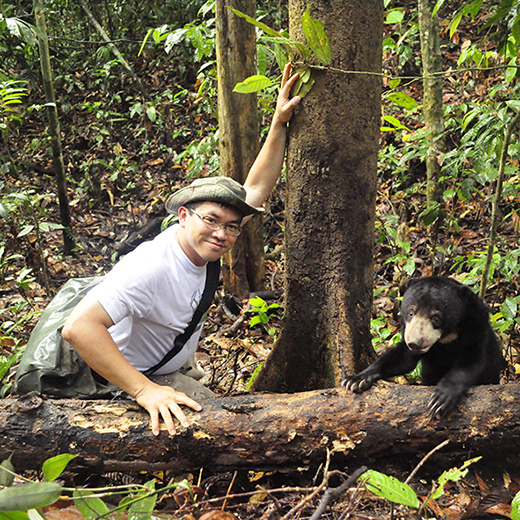