University of the Sunshine Coast academics have been shortlisted for a prestigious Australasian award for serious games, after developing a ground-breaking new computer game to train health workers.

The application ‘Safe Environments’, developed by USC health researchers, was named as one of two industry finalists in the 2016 Serious Games Showcase and Challenge Australasia (SGSCA). Winners will be announced on Wednesday 28 September at the Australasian Simulation Congress in Melbourne.

Developed in collaboration with Bondi Labs, the simulation training game sees users enter into a variety of three-dimensional simulated environments – including a home, a healthcare facility, a park and a supermarket – and asks them to identify safety risks and hazards for a particular patient.

Players receive points for finding and managing the risks, which are linked to the Australian National Safety Standards, and finish the game with a score and feedback on their result.

USC Associate Professor in Nursing Patrea Andersen, who will showcase the game at the Congress in Melbourne next week, said she was thrilled to have the game recognised on a national stage.

“Safe Environments gives students and professional healthcare workers an alternative way to engage with this really critical information,” she said. “We’ve included more than 100 safety factors, which are spawned differently every time someone plays the game.

“Players can apply what they’ve learnt in a safe yet naturalistic setting, using a 3D platform and real-world scenarios that we’ve developed with industry input and trialled with Suncare Community Services.

“Trips, falls and accidents in the home account for a huge proportion of hospital visits, and that’s an area where we think this game could make a real difference.”

The winner of the category will travel to Orlando, Florida in November to represent the Australasian region at the International Serious Games Showcase and Challenge, part of the world’s largest simulation conference.

“Simulation and serious games are a big part of the future for health education,” she said.

“When that element of point-scoring and competition is introduced, there’s suddenly a lot more motivation to develop skills or knowledge that is traditionally seen as dry.

“USC is quickly carving out a niche in simulation and visualisation, and this shortlisting is testament to how we’re providing leadership in innovating education delivery.” 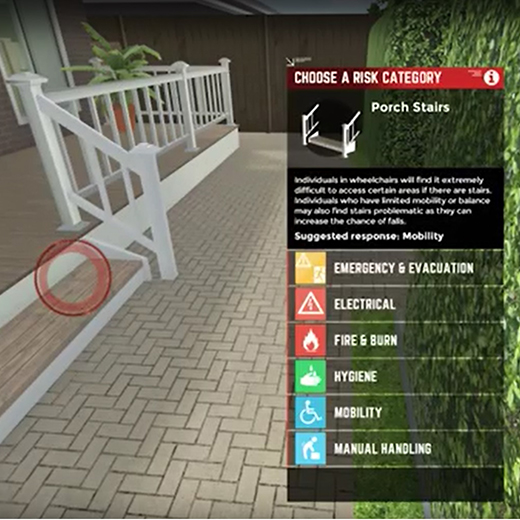