Three students from the University of the Sunshine Coast have claimed top prizes in a recent 60-hour international game design competition.

Doctor of Creative Arts student Alayna Cole and Serious Games students Cailean Congedo and David Page outperformed more than 100 other developers from around the world during the Serenity Forge Game Jam, which saw participants develop and submit original games over the course of one weekend.

Alayna, who is also a sessional academic at USC, won the Jury Award for her interactive art installation game ‘Enthymema’, while David and Cailean took out the peer-voted Audience Award for ‘It’s Okay’.

Based around the jam’s theme of health, ‘It’s Okay’ sees players follow Cailean’s own experiences following the death of his mother, with the aim of helping others cope with the loss of loved ones.

“David and I didn’t dance around the issue of grief in this game,” Cailean said. “It was a very real and personal thing, and I think that’s why it was successful.

“I think games, perhaps more than other types of media, can create empathy and sympathy. The player isn’t just hearing about a tough or traumatic experience, they are actively engaging with it.

“We submitted the game literally one minute before the deadline, so it was fantastic to have won one of the major awards.”

Linking the physical world with a computer-based experience, Alayna’s game asked participants to draw on their skin as they worked through the story.

“‘Enthymema’ is designed to start a process of self-reflection and have players consider their own identities and the choices they’ve made,” she said. “It’s a short game, but players carry the experience with them throughout the day.

“I honestly wasn’t expecting the kind of response I received. It was fantastic to receive the award, but what meant even more was the feedback from people who played it saying that it had made a positive difference to them.”

David and Cailean, who are both in their first year of USC’s new Bachelor of Serious Games, now plan to work together on more games projects.

The games are available to be played for free online at www.serenityforge.com/gamejam. 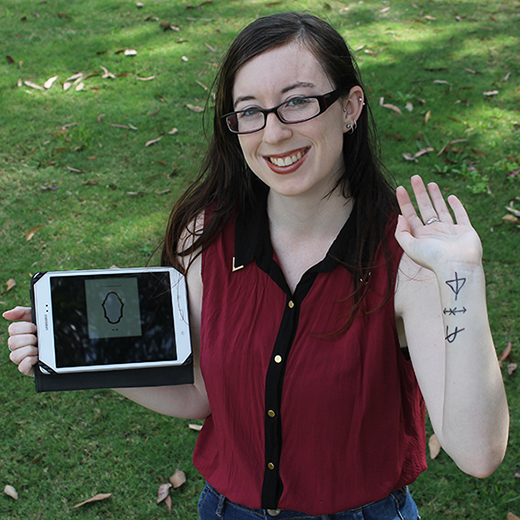