Green sea turtle hatchlings getting caught in rubbish were among the worrying discoveries by USC students conducting a major clean-up of Fraser Island’s beach front.

About 120 USC students and 10 staff members recently collected more than a tonne of rubbish from a 30km stretch between the southern tip of the island and Eurong.

USC Professor of Marine Science Thomas Schlacher said the students were surprised to discover that the stunning and treasured open eastern beaches of the World Heritage site were so heavily and widely contaminated by plastic litter.

“Once you start looking carefully it becomes obvious that dozens to hundreds of small plastic fragments cover virtually every square metre of the upper beach and the foredunes,” Professor Schlacher said.

“Almost half of all litter was deposited in the low dunes and hidden from view by spinifex grass which ‘masks’ the litter.”

The clean-up was inspired by concerns about the beach rubbish from second-year Animal Ecology students visiting the island for field studies as part of the degree’s Marine and Coastal Ecology course.

“USC has a research and learning centre at Dilli Village, and as ‘users’ of the island, we wanted to make a positive contribution to the island’s environmental condition.

“It also seemed somewhat incongruous to us that thousands of people drive past rubbish items every day and nobody bothers to stop to pick up the obvious items.”

He said among the most unusual finds was a complete bed head, half a fiberglass tinny and a high-heel thong created by somebody nailing a wooden wedge to a standard thong.

It is estimated that most of the material had been washed ashore, including debris swept into rivers from recent heavy rain.

“It is possible to make sure that our treasured coastlines remain attractive and harm to marine life is reduced by being careful to discard all rubbish properly.” 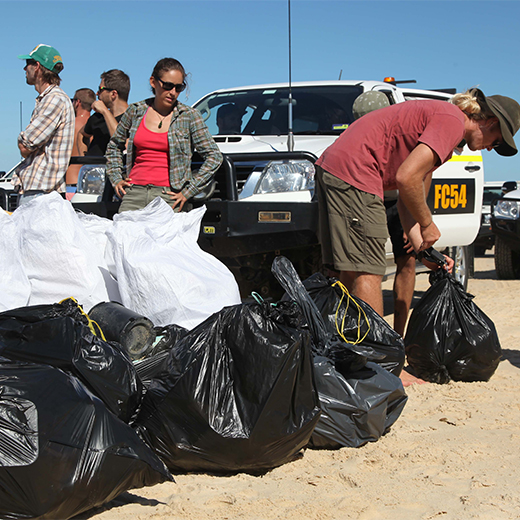 An Indigenous USC PhD student is taking on the complex task of bringing to light the history of Queensland’s First Nations people that has been hidden in state archives in a bid to amplify their voices in historical narratives.

Graduate plans to use animal-assisted therapy to improve lives

Research to provide fresh insights into the benefits of animal-assisted therapy within the disability sector is the next career focus for new Fraser Coast graduate Caitlin Winen.

A new interpretive centre will open on K’gari (Fraser Island) next week to help increase understanding, appreciation and conservation of the world’s largest sand island.