Graduate happy for guide dog to steal the show - University of the Sunshine Coast, Queensland, Australia

Nicole Damarra’s guide dog, Nev, stole the show when she graduated from USC in 2013, with Chancellor John Dobson also shaking hands with the clever canine after congratulating Nicole on gaining a Bachelor of Social Science.

And Nicole is just as happy for the limelight to fall on her new guide dog, Olson, when she crosses the stage to receive her First Class Honours degree tomorrow (Thursday 6 April) during a ceremony at 4pm at the Matthew Flinders Anglican College Performance Centre.

The 35-year-old student who is legally blind said while Nev had been praised by the Chancellor for attending all her lectures during her undergraduate degree, Olson had been just as diligent in accompanying her throughout her postgraduate studies.

And there’s more in store for Olson, with Nicole this month starting her PhD research into the implementation of the National Disability Insurance Scheme (NDIS) from the perspective of people who are blind and sight-impaired.

“The NDIS has been described as the biggest social policy reform package since Medicare,” she said. “It’s important that we get the best outcome for people with disability, and streamline the whole process so that it can achieve its goals.

“The scheme is continuing to go live across the country and there is not a lot of scholarship in relation to it yet.

“It was meant to be a capacity-building exercise to help people get off welfare if they could. But it has become bogged down in bureaucracy, appears to involve pigeon-holing people, and there seems to be a lot of wastage.”

Nicole’s graduation ceremony tomorrow is one of nine USC ceremonies being held at Matthew Flinders Anglican College Performance Centre this week. Crowds totalling 5,000 people are expected as 1,400 degrees and certificates are awarded.

A video of Chancellor John Dobson congratulating Nicole with her former guide dog, Nev, at the 2013 graduation ceremony is at: http://www.youtube.com/watch?v=DV2jGUqsfQ4 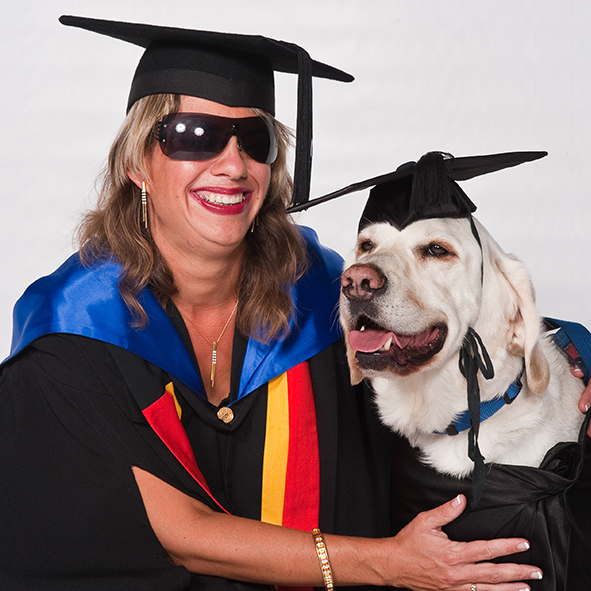