Dalby Christian College’s 2016 captain and dux Phoebe Gaul has become the inaugural recipient of a new $20,000 scholarship at the University of the Sunshine Coast.

Phoebe, 18, enrolled in a Bachelor of Occupational Therapy (Honours) at USC this year after gaining career inspiration from a recent mission trip to China that involved working with children with disabilities.

The OP3 student said she was delighted to have received the prestigious June Canavan Regional Scholarship that was introduced to support women from regional areas who show leadership in sport and health science.

“Receiving the June Canavan Regional Scholarship has already made a huge difference to me,” Phoebe said. “I thought I’d have to work and save money for a year before I came to uni, but the scholarship has allowed me to get started on my degree straight away.

“It means I won’t have to work, so I can study really effectively and put my best effort in, as well as helping me with travel costs to visit my family back in Dalby.

“The smaller, friendly environment of the USC campus really appealed to me as someone from a small town.”

The scholarship is funded by the June Canavan Foundation, an organisation established to honour the memory of Sunshine Coast sports medicine specialist Dr June Canavan who died tragically in a plane crash in 2009.

Phoebe, who is settling into her first semester of studies at USC, said she hoped to eventually build a career as as an occupational therapist in a remote setting.

“I did a mission trip to China last year, where we stayed at an orphanage, and that made me realise how important it was to make sure people had the skills to support themselves,” she said.

“I’d like to gain some experience in rural or remote Australia, perhaps in the rehabilitation field, before going to work overseas.

“My studies so far have been great. I thought you’d have to be completely independent and on your own when it came to uni work, but the tutors are really willing to help if you need it.” 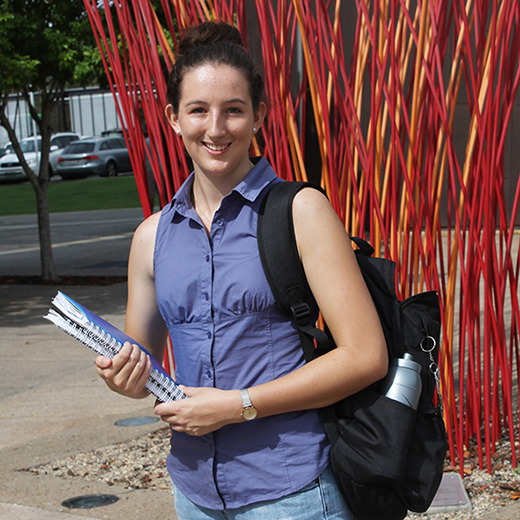