A simple video of a child in Vanuatu crawling for the first time has demonstrated the incredible ongoing effects of a work placement by USC Occupational Therapy (OT) students nearly a year ago.

Five USC students spent seven weeks in 2016 assisting families in a rural community in North Vanuatu, and were recently delighted to receive a video showing the progress of a three-year-old child who they visited throughout the placement.

The child, who has Down Syndrome, had limited mobility before the fourth-year USC students began working with her and her mother to improve strength and movement.

USC Lecturer in Occupational Therapy Dr Ann Kennedy-Behr said the students’ activities with the child and the tasks they introduced to her mother had helped her advance remarkably in her independence.

“When we first saw her, she was sitting and reaching out for objects but she wasn’t close to crawling,” she said.

“We started by moving items a little further away from her, giving her small successes, and introduced activities her mother could engage in.

“When the Medical Santo posted the video of this little girl crawling independently, the students that were placed with her were absolutely thrilled. One of them told me they were crying out of happiness when they saw it.

“It really brought home to them that what they do can make a real and ongoing difference.”

USC graduate Rylee Bradford, one of the USC students who undertook the placement, said she had been amazed to see the improvement in the young child.

“I became quite emotional when I saw the video of her crawling,” she said.

“It was really humbling to see the difference in her and to know that we’d contributed in some part to that outcome.”

Following the success of the work placements in 2016, USC has secured Australian Government New Colombo Plan funding to send six OT students and six Paramedic Science students to the island in June this year.

Dr Kennedy-Behr said working in a low-resource environment like Vanuatu was challenging for students and had made them better clinicians.

“That hands-on experience and their ability to deal with complex situations will be invaluable in their future careers,” she said.

“Many Australians might just see the gorgeous beaches in Vanuatu, but it’s also a developing country and that can be quite confronting.

“All the feedback we’ve received is that the capacity we built in that Vanuatu community has really made a positive difference to that community.” 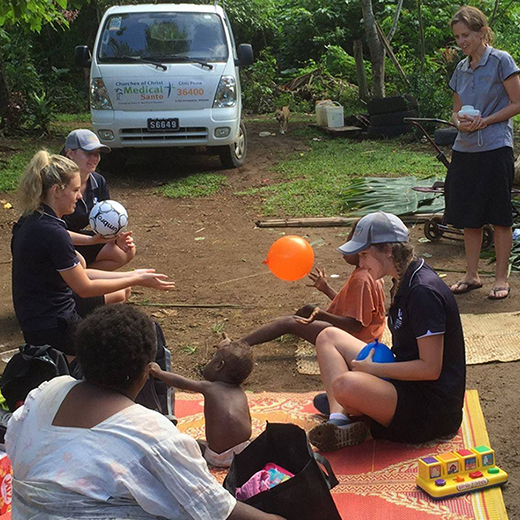