University of the Sunshine Coast research led by Associate Professor of Molecular Biology Scott Cummins has contributed to a breakthrough discovery that could protect the Great Barrier Reef from the coral-killing crown-of-thorns starfish.

The painstaking process of sequencing the starfish’s genome (DNA set) and pheromones (chemicals released into the environment) was led by the University of Queensland in collaboration with USC, the Australian Institute of Marine Science (AIMS) and the Okinawa Institute of Science and Technology.

Dr Cummins said it was the first time that researchers had clearly shown the marine pest responsible for mass destruction of live coral was interacting with its environment by detecting and responding to odours.

“The key role of odour in these starfish interactions is evident both in their aggregation and in their aversion to their predator, the Giant triton snail,” he said.

“This paper proves that technologies have come of age in understanding how important chemical communication is to Crown-of-thorns starfish, and likely for all organisms on a coral reef.

“It could inform new biocontrol strategies to potentially manage the pest by either attracting or dispersing them. This would in turn help protect delicate reef ecosystems and benefit tourism.”

“We conducted research at AIMS in Townsville and on USC campus at Sippy Downs, using the recently expanded laboratories and aquariums of USC’s Genecology research group,” Dr Cummins said.

“USC was involved in animal behaviour experiments that showed the starfish using their sense of smell to move towards an attractive odour or away from something averse. We also investigated proteins to identify what pheromones were released by the starfish.”

The research sequenced the genomes of crown-of-thorns starfish from Australia’s Great Barrier Reef and reefs off Okinawa, Japan.

Dr Cummins’ USC research group, one of few in the world specialising in olfactory communication in aquatic animals, is continuing its crown-of-thorns research.

“The key pheromone we identified is actually made up of multiple different proteins and we need to know what each means. It’s like finding a new language but not knowing what all the words mean.” 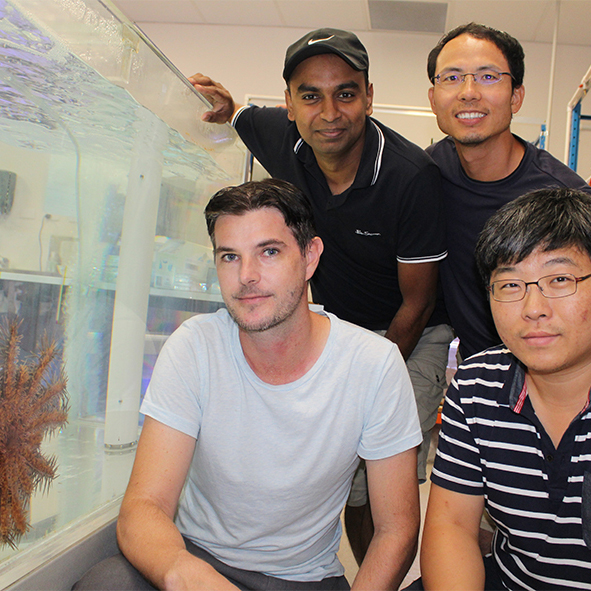