Imagine a 150kmh road built on high-tech plastic pipes laid between Weipa and Melbourne to enable convoys of self-driving trucks to carry freight direct from the Cape to the city in 24 hours.

The road would save five days’ transport time around Australia’s east coast, removing tonnes of freight from other roads, rail and sea including Great Barrier Reef waters, while collecting rainwater in the pipes to irrigate the country’s dry centre and generate electricity.

It’s no pipe dream for USC Professor John Yeaman, who earlier this year received a Member of the Order of Australia (AM) for his 60 years of service to civil engineering and road asset maintenance management, professional organisations and the community.

USC’s Professor of Civil Engineering Construction since 2011 has been working with research students and two southeast Queensland firms to take his concept from the drawing board to commercial reality.

He discussed details of his plan at a Southern Regional Forum held by Engineers Australia, Queensland on the Sunshine Coast earlier this year, and at a conference in Milan last month.

Professor Yeaman, who teaches USC’s Master of Engineering (Transport Technologies), said he was honoured to receive the AM in recognition of his pioneering work – and determined to bring to fruition his current projects in the pipeline.

“I want the next generation of civil engineers to adopt innovative approaches, using the latest technologies, to find solutions to problems,” he said.

“For example, the road proposal I’ve been working on for three years could remove the need for rail lines to ports on the Great Barrier Reef. Instead, coal mines in the Galilee Basin could pump slurry to Weipa, to be carried on the new polyethylene pipe road heading south.

“The mines have autonomous trucks in use now. I have two partners, Polyworld at Clontarf for the pipes and Austrahort at Cleveland for the Consolid road base materials.

“USC has had Honours students working on different elements of the concept that I’ve been presenting to government and industry professionals. We just need to keep going with research.”

Professor Yeaman has been a Fellow of the Australian Academy of Technological Sciences and Engineering since 2003 and recently started a two-year appointment with the Department of Transport and Main Roads as Chair – Professor of Pavement Engineering. 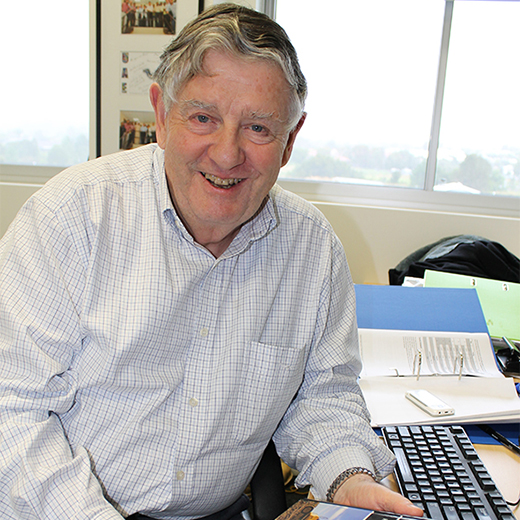